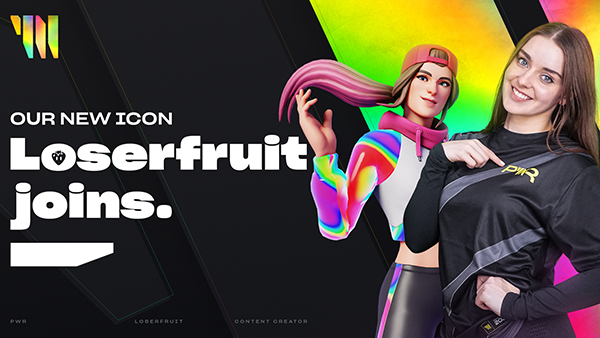 PWR, a global leader in creating and developing entertainment in online gaming, has signed Kathleen ‘Loserfruit’ Belsten to its content creator team.

With over four million subscribers across her channels on YouTube and 2.6 million on Twitch, Belsten is one of the world’s most well-known and successful streamers and gaming personalities, sharing regular content with her engaged fans. She also achieved the significant accolade of being the second content creator to receive her own Fortnite Outfit as part of the Fortnite Icon Series.

Belsten will be joining forces with the PWR team to create fresh new content and gaming experiences across PWR’s channels. While Belsten and Lachlan Power, PWR’s founder, are both Australian and have frequently worked alongside each other since 2017, this signing represents the first formal collaboration together on building PWR’s growing brand platform.

Power enthused “I’m so excited to welcome Loserfruit to our team and have her as an ally in creating and developing new content to entertain and engage our audiences. Over the years she has developed a strong reputation among the online gaming community as being a fun, engaging and dedicated creator, so it makes sense to have her join the PWR team as we make even more awesome content and experiences.”

In an industry often represented as being male dominated, data from Digital Australia’s 2020 report* suggests that since 2005 the number of female players has levelled to almost 50/50. Belsten is passionate about using her platform to support the removal of stereotypes in the gaming industry and to encourage fellow gamers to pursue their passion no matter their attributes. Both Belsten and PWR are committed to fostering and developing communities for everyone, everywhere.

Belsten adds “I’ve been really inspired by what team PWR is doing and am stoked to be a part of it.  I have always strived to encourage others and help foster talent using my platform and that’s something PWR is already doing and something that I want to be a part of. I’m looking forward to working on the exciting projects PWR has in the pipeline and bringing my own personality and initiatives to this organisation.”

The new content created in synergy between Loserfruit and PWR will start to be released in the next few weeks, with key activities to look out for including more PWR in house Pro-Ams, co-streams and new Fortnite content.