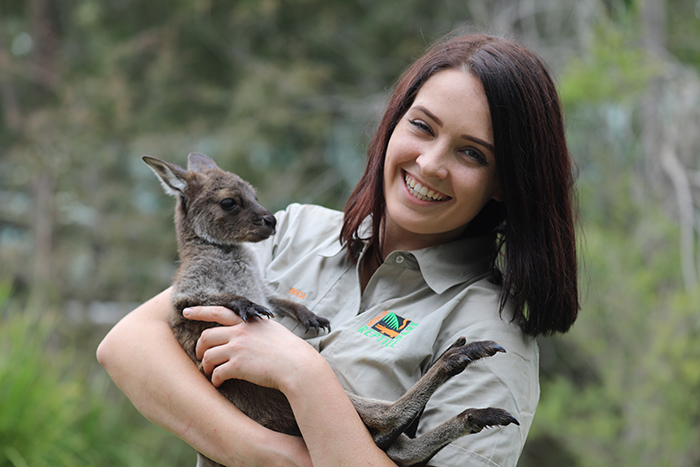 The video of the joey posted on their Facebook page, has already gained over 80,000 views in just two days.

The Australian Reptile Park named the joey Roo-Paul after famous drag queen RuPaul – a fact that has not gone unnoticed by commenters on the video.

One said, “Get out of here, that’s the best name ever”, another commenting “so so cute!” while the rest of the comments are mostly references and quotes from the TV show ‘RuPaul’s Drag Race’.

Roo-Paul is being hand raised by Keeper Erica Danae who takes him home each night after work to attend to all his needs.

He had been found inside his mother’s pouch on the side of the road, after she had been hit. “Roo-Paul is the light of my life! Not only is he a little character as his name permits, but he is a great ambassador for road safety and kangaroos. He serves as a reminder to slow down on our roads and keep a look out for what’s ahead.”

Danae continued, “Our native wildlife is so important to this country, and if Roo-Paul going viral online is enough to have at least one car slow down on our roads, that’s amazing!”

Roo-Paul will be hand raised until he is big and strong enough to be let out and about at The Australian Reptile Park, where visitors will eventually be able to hand-feed him in their free-range kangaroo area.

This hands-on interaction is often a highlight to both domestic and international visitors.

Video can be viewed at https://www.facebook.com/AustralianReptilePark/