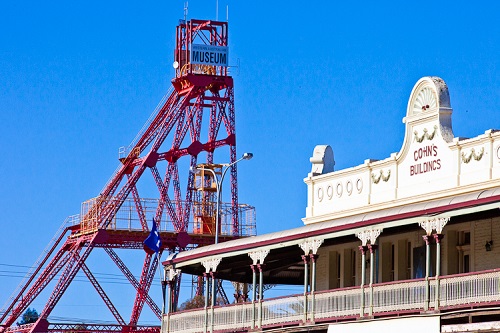 The goldfields hub of Kalgoorlie-Boulder has been named the winner of the GWN7 Top Tourism Town Award - announced on Wednesday evening in front of more than 250 people at the fourth annual WA Tourism Conference at Perth Convention and Exhibition Centre.

Kalgoorlie-Boulder claimed the award in the category for towns or cities with a population over 5,000, receiving a $25,000 airtime package from GWN7 to promote Mandurah on regional television.

The judges were very impressed with Kalgoorlie Boulder’s strong focus on tourism planning and development together with initiatives to attract visitors to the destination. Strong support from local government and collaboration among tourism operators is enabling growth of tourism to this regional centre.

Carnarvon was named the winner of the GWN7 Top Tourism Award for a town with a population under 5,000. The destination showed a high level of industry, community and local government collaboration, and strategic use of social media to attract visitors to their town. The destination received a $10,000 airtime package from GWN7.

Now in its 29th year, the awards program is a major highlight of the State’s tourism calendar, with prizes eagerly coveted by towns and cities across Western Australia. Visitor Centres enter the awards on behalf of their destination, and entrants are required to submit a written submission and a short video highlighting the key attractions and experiences on offer in their destination. Finalists are chosen from the written submission, followed by a site visit by two judges.

The Category winners in this year’s awards were:

The awards are run by Visitor Centres WA and sponsored by long-term supporters GWN7 and Vanguard Press.

Image: The Museum of the Goldfields in Kalgoorlie-Boulder.