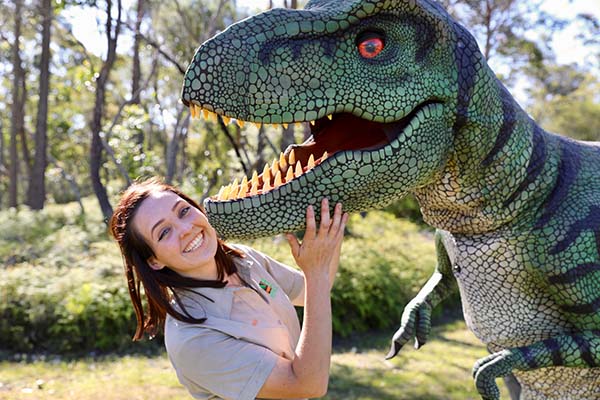 Popular demand has seen the Australian Reptile Park promote its Jurassic Zoo from the 19th of December 2019 until the 27th of January 2020.

Recently awarded Gold at the NSW Tourism Awards for Major Tourism Attraction, the Australian Reptile Park is a hands-on zoo located the natural bush setting of the Central Coast of NSW, only 60 minutes from Sydney or Newcastle.

Jurassic Zoo activities include a “Dino Dance Party” with the giant reptiles, daily shows featuring the dinosaurs and the popular fossil dig for budding palaeontologists.

Giant statues of many species of dinosaur such as the triceratops, stegosaurus, allosaurus and parasaurolophus will come to life with new interactive sounds that will make guests feel as though they’ve been taken back in time and leave them in awe while educating them on the extinct reptiles.

Additional entertainment during the Jurassic Zoo event series, will be daily feeding of the park’s resident crocodilians - the closest living relative and ancient cousins of the dinosaurs. Australian Reptile Park icon “Elvis”, a five metre Saltwater Crocodile, will be fed daily during a thrill-seeking show demonstrating the strength of his snapping jaws, capable of crushing the skull of prey as large as a water buffalo.

Deadly and dangerous Jurassic Zoo! events extend into the Australian Reptile Park’s alligator lagoon, home to 40 American Alligators.  Their daily feeding show consists of park keepers entering the danger zone of the lagoon, and dangling their food over a walking plank, whilst tempting the giant reptiles to launch high out of the water allowing visitors to marvel at their erratic jaw snapping for food.

Roving keepers at Australian Reptile Park will also be wandering around with a variety of scaly reptiles and cuddly mammals for guests to meet and greet.

Returning in January 2020 is the popular family friendly zoo slumber event, The Aussie Bush Wildlife Sleep Out on Friday 10th January 2020 and Friday 24th January 2020. Guests will have the thrill of camping out under the stars among wildlife, plus experience an evening of interactive and hands-on wildlife shows. There will be animal encounters, an Aussie BBQ, marshmallow toasting over camp fires, damper making and much more.