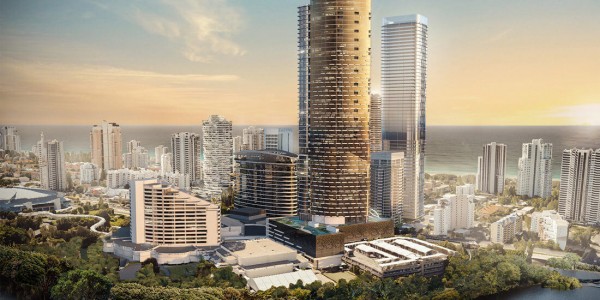 Gold Coast tourism landmark, Jupiters Hotel & Casino, the site for many industry conferences and events, is transitioning to its new brand as The Star, Gold Coast.

Being progressively rolled out across the casino operator’s properties in Sydney, the Gold Coast and Brisbane, Echo Chief Executive Matt Bekier said the name change, which will see the company trade under The Star banner, will allow a seamless transition to a consolidated brand platform.

Bekier stated “with the $345 transformation underway at the Gold Coast we are creating a casino which will look very different from the old Jupiters. Now we really need to lift our game.

“Previously, we did not have the facility to shift our high-end customers from Sydney to the Gold Coast but we will now be providing a new-look property which will appeal to VIPs.

“We are not only spending money on the property, we are about to begin a new customer service program which will offer a true high-value customer proposition.”

The rejuvenation of the Gold Coast property is seeing the development of a new 17-storey, six-star all-suite hotel at the front of the property, scheduled for completion completed in time for the Gold Coast 2018 Commonwealth Games.

Bekier added “this is more than a change of name and logo. It marks a step change in the way we intend to operate.

“As a group we will own and operate truly world-class integrated resorts that will retain local identity but deliver consistently premium standards of service and experiences.”

The Star Sydney is also being rebranded while the Treasury Casino & Hotel in Brisbane will be known as Treasury by The Star as an interim rebrand and renamed The Star, Brisbane when the Queen’s Wharf integrated resort opens in 2022.

Image: Artist'c concept for the redeveloped The Star, Gold Coast.