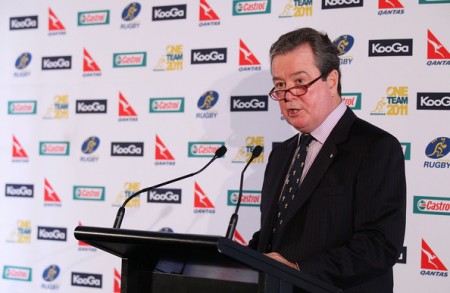 John O’Neill, the former Chief Executive of the Australian Rugby Union (ARU) and Football Federation Australia is to be inducted into the Sport Australia Hall of Fame.

The former Sydney banker and solicitor, who only began his life in sport management in his mid forties, has been recognised as a modernising and successful hand at the wheel of two of Australia’s biggest sports, as Chief Executive of the Australian Rugby Union and Football Federation Australia.

His tenure with both rugby and football saw O’Neill re-shape each organisation, taking both to eras of unprecedented success on and off the field.

O’Neill will receive the highest honour that can be bestowed upon a figure of Australian sport, with his induction as a General Member of the Sport Australia Hall of Fame.

His induction will form part of the 31st Sport Australia Hall of Fame Induction and Awards Gala Dinner, held at Palladium at Crown, Melbourne – presented by Etihad Airways.

The night will also feature the Induction of eight new Australian sporting greats into the Sport Australia Hall of Fame, the announcement of the 37th ‘Legend of Australian Sport’, the naming of ‘The Don’ winner, presentation of the Spirit of Sport Award and recognition of The Great Sporting Moments and Team Sport Australia Awards.

“His leadership at two peak Australian sporting bodies has proven pivotal in the ongoing success of both rugby union and football in this nation, and with time as the ultimate test, O’Neill has established himself to be an artist of administration.”

John O’Neill ended his second spell at the ARU in 2012 and is now Chairman of gambling and hospitality group Echo Entertainment. He was appointed an Officer of the Order of Australia (AO) in the Queen's Birthday Honours List in 2004 for services to rugby as an administrator, to the financial services sector, and to the community through educational and charitable organisations.

Established in 1985, the Sport Australia Hall of Fame plays a vital role in preserving and perpetuating Australia’s rich sporting heritage, whilst promoting the values of courage, sportsmanship, integrity, mateship, persistence, and excellence, all underpinned by generosity, modesty, pride and ambition.