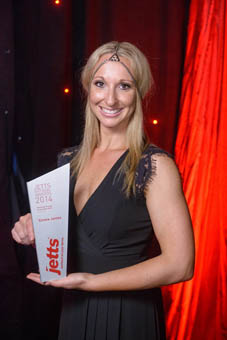 Leading 24/7 fitness group, Jetts, has announced the winners of its 2014 awards, an annual event celebrating the best Jetts fitness clubs in Australia and New Zealand.

The Awards were presented to the winning business owners, club managers and personal trainers during the company’s annual conference.

Jetts recognised its top team members across seven categories on both a state and national level. Each category was judged on a range of criteria including business performance, club culture and appearance, customer service, member feedback and excellence in other operational areas within each club.

The national winners were:

With the addition of winners crowned across each state, there were 32 winners chosen on the evening.

Commenting on the awards, Jetts Chief Executive Martin Oliver stated “the contribution of business owners, club managers and personal trainers is paramount to each club’s continued success and position within their local communities.

“We are committed to providing a great service and experience to each and every member and we are passionate about making our clubs as accessible as possible from when a member first walks through the door to when they finish their session.

“We have some fantastic people running our clubs across the country and I’d like to congratulate all of our winners and thank them for the hard work they continue to put in every day.”

2013 also saw Jetts awarded the Canstar Blue #1 gym for customer satisfaction for the second year in a row.

The company intends to open a further seven clubs in Australia by the end of the year with dozens more planned to open in 2015.