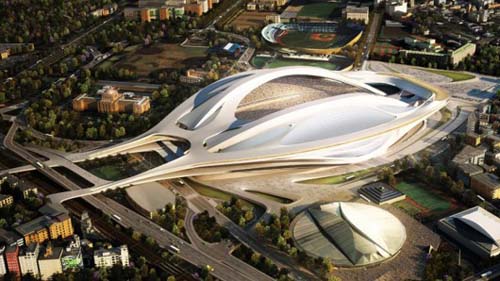 The Japan Sport Council (JSC) has given the go-ahead for the construction of Tokyo’s new Olympic Stadium for the city’s hosting of the summer Games in 2020.

The new 80,000-seat stadium, which will serve as the central venue for Tokyo 2020, is to be built on the site of the 56-year-old, 54-000-seat National Stadium – host venue for the 1964 Olympics. The current venue will be dismantled over 15 months beginning in July with the new stadium due to be completed in time for the Rugby World Cup, which Japan will host in 2019.

The AFP news agency said the government-affiliated JSC opted to slightly alter the original design plans by trimming the stadium’s height from 75 metres to 70 metres to appease concerns about the impact it will have on the Tokyo skyline. Campaigners have criticised the size of the new stadium, claiming it is too big.

Expected to cost US$1.6 billion, the stadium will be built in an area with numerous parks and a grand Shinto shrine, with building heights historically limited to 15 metres. The Tokyo Metropolitan Government increased this limit to 75 metres in June last year.

Explaining the move, Japan Sports Council President Ichiro Kohno stated “by lowering the height from 75 metres to 70 metres, we think the design has become great in terms of landscape.”

Concerns have also been raised about the cost of the new stadium after initial estimates placed the total cost at around $3 billion, more than double the original amount stipulated in the design competition won by acclaimed UK-based architect Zaha Hadid. Despite officials having reduced the total cost, critics remain sceptical about the sudden price drop and suggest that the final bill will be much higher than the stated cost.

The Olympic Stadium plan now awaits final approval from the ministry in charge of sports administration.