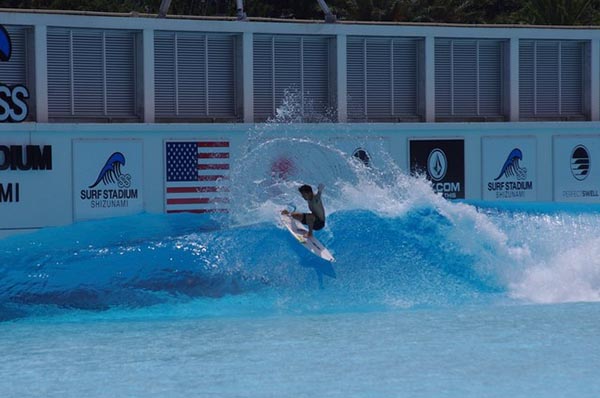 American Wave Machines has announced that following the construction of its PerfectSwell artificial wave pool Surf Stadium in Shizunami, Japan and USA Olympic Surf teams will be training on never before seen waves and PerfectSwell® innovations.

PerfectSwell, located in the beach and surf town of Shizunami, 250 kilometres south west of Tokyo, American Wave Machines (AWM) has advised that the PerfectSwell pool “has been constructed in record time” despite the disruptive business conditions that have affected world travel and challenges to productivity. In cooperation, Surf Stadium Japan (SSJ), the licensee, and AWM overcame supply chain and logistics challenges to deliver the thousands of components required with civil works completed in 389 days.

The punch and variability of PerfectSwell® waves along with the repeatability presents an unprecedented training opportunity for professional athletes in a safe controlled environment to ensure the highest degree of health and safety in compliance with government restrictions.

During training, PerfectSwell® will be able to mimic wave conditions and competition format forecasted for the Olympics which will be held in the ocean at Tsurigasaki Beach, also known as Shidashita Beach, in Chiba, near Tokyo.

The Olympic surfing contest is scheduled for 25th to 28th July. In a format similar to the sailing program, surfing will have a waiting period of 16 days (25th July – 9th August) to run the ladder competition.

PerfectSwell® Shizunami Surf Stadium is founded on principals of community and giving back and will further the strong surfing spirit that is already thriving in Shizunami.

For more information on American Wave Machines go to americanwavemachines.com/

Image: Hiroto Ohhara smashing the lip and releasing his fins in preparation for surfing’s Olympic debut