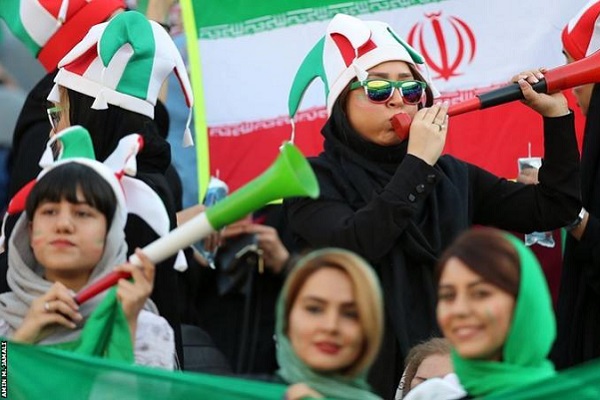 Women have attended a FIFA World Cup qualifier in the Iranian capital of Tehran after being freely allowed to enter a football match for the first time in decades.

Having effectively been banned from stadiums when men are playing since just after the 1979 Islamic revolution, the change followed international pressure and the death of a young fan who had set herself alight after being arrested for trying to attend a match earlier this year.

More than 3,500 women attended Thursday's World Cup qualifier against Cambodia (won 14-0 by the home side), having been granted access to a special women's-only section of Tehran’s 78,000 capacity Azadi Stadium.

While a handful of women had watched games prior the Cambodian match, they had been pre-selected by authorities. This week’s match was the first time women had been allowed to buy tickets on general sale.

With the women’s section full a whole hour before the match started - with the rest of the stadium virtually empty – one female fan was reported by the BBC as commenting “when we arrived, women and girls were celebrating already and cheering for the national team.

"The excitement was a rush - to be let into the stadium for the first time.

"They treated us very respectfully at the entrance to the ground, from where we took buses to get to stadium itself.

"We were very, very happy and excited to see the pitch, for real, for the first time in our lives.

"Inside the stadium I couldn't hear myself talk.

"There were supervisors from FIFA who arrived to observe and check the behaviour of the Iranian authorities.

"Women were celebrating with an hour to go to kick off - the men had not even arrived."

The pressure on Iran to allow women to watch football matches without restriction had already been increasing after world football governing body FIFA brought in statutes that banned countries from discriminating against fans on the basis of gender, but the death of Sahar Khodayari - known as the ‘blue girl’ - after her arrest while trying to watch a domestic football game made FIFA insist they would "stand firm" over women being let in.

Human rights group Amnesty International described the move on Thursday as a "cynical publicity stunt" saying that there were only a "token number" of tickets for female fans as it called for all restrictions on female attendance to be lifted.

Saudi Arabia last year allowed women for the first time to attend a football match as part of an easing of strict rules on gender separation by the ultra-conservative Muslim country.