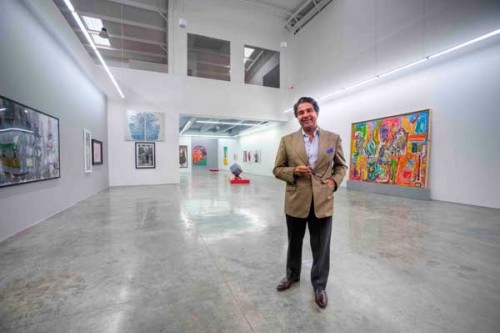 Iranian-born art collector Ramin Salsali is planning to erect a modern art gallery in the heart of Dubai's commercial centre.

To be located in the Burj Khalifa district in downtown Dubai, the Dubai Museum of Contemporary Art (DMOCA) will include some of Salsali's own collection as the basis the new gallery - Salsali owning one of the largest private art collections in the Middle East.

Hoping to be at the heart of turning Duba into an international hub for artists and art collectors, the first phase of the museum will begin next year with the construction of 2,800 metre2 of temporary exhibition space.

In addition to exhibition halls and storage facilities for artwork, the Dubai Museum of Contemporary Art will include a Great Library as well as a Sculpture Garden.

The building itself will have a distinctive facade consisting of illuminated cubes connected by spatial structures, and the young Iraqi designer Alia Dawood will oversee the construction design.

Dubai has become an important centre for art exhibitions and dealerships. Prominent auction houses such as Christie's hold big sales in this city. The city has especially become a hub of the contemporary art scene in the Middle East, and Iranian artists have contributed significantly to this scene. Dubai's numerous art exhibitions are frequented by major art dealers, and this has transformed the city into a vibrant centre for visual arts.

Salsali (pictured above) is aiming for DMOCA to be backed by private sector investment rather than the Dubai or United Arab Emirates Government, with investment bundles containing a maximum of ten shares to be sold to individuals and private institutions wishing to support the museum, eventually making DMOCA the Gulf state's first publicly funded art institution.

The United Arab Emirates has attracted growing art infrastructure and arts scene in recent years. In 2013, more than 25,000 attended Art Dubai, while the Salsali Private Museum, showcasing the entrepreneur's 700-piece strong collection, opened in Dubai in 2011.

Abu Dhabi's Saadiyat Island will open a branch of the Louvre in 2015, followed by a division of the New York Guggenheim Museum in 2017.

For more information go to www.facebook.com/pages/Dubai-Museum-of-Contemporary-Art-DMOCA/142983965840808