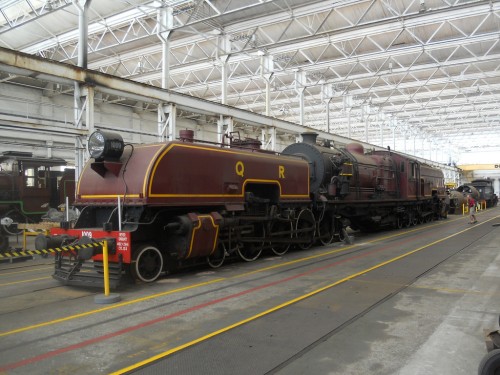 Ipswich's Workshops Rail Museum has reached a major arts and tourism milestone welcoming its one millionth visitor during its annual 'Day out with Thomas' special event.

Queensland Arts Minister Ian Walker said the museum was a big contributor to the State's cultural tourism industry and was recognised with double silver wins in the 2013 Queensland Tourism Awards, in the Tourist Attraction and Heritage and Cultural Tourism categories.

Minister Walker explained "the multi-award-winning Workshops Rail Museum tells a unique story of Queensland's history and this is a wonderful milestone to reach.

"Places like the Rail Museum support the tourism industry, one of the four pillars of the economy that the Newman Government promised to grow.

"Rail also plays a huge part in the other pillars of agriculture, resources and construction and this museum demonstrates the pivotal role it has had in the state's development.

"Many Queenslanders have a connection to rail, an industry which began in Ipswich in 1865.

"The large numbers of visitors and numerous awards are recognition of The Workshops Rail Museum's longstanding role as one of the state's most popular museums.

"It is also a great contributor to the Queensland Government's Arts for all Queenslanders strategy, announced at the election, as well as the DestinationQ blueprint."?

Minister Stuckey added "the Workshops Rail Museum is a significant attraction for Ipswich, being a must-do experience for arts, cultural and heritage buffs alike.

"Tourism across Queensland is going from strength to strength under the Newman Government. I congratulate all volunteers and supporters on their achievement."?

The Workshops Rail Museum Director Andrew Moritz said the museum maintained close ties to the local community and was a key attraction for Ipswich.

Moritz concluded "we've been passionately sharing the story of rail in Queensland for more than 10 years and we appreciate the continuous community involvement and support.

"The museum team has plenty more of the story to tell and we look forward to sharing it with many more visitors?"

For more information go to www.theworkshops.qm.qld.gov.au