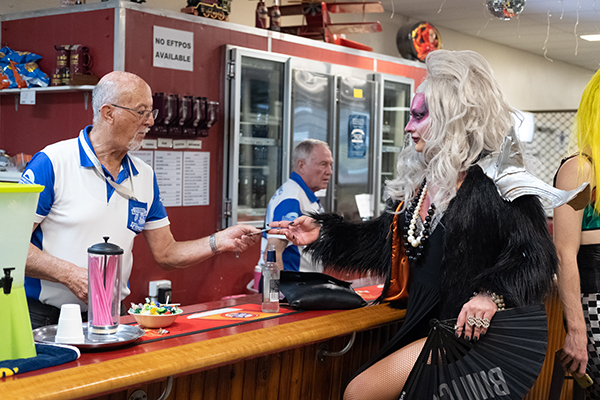 South-East Queensland-based production company Flickchicks are making an Ipswich-centric drag queen documentary entitled Bowled Over. Bowled Over follows Taboo, a group of drag performers with an unlikely following in Ipswich, that have been keeping the local lawn bowls club afloat with their packed-out live shows.

The group and bowls club face an uncertain future with the impending retirement of one of Taboo’s stars, the ‘biggest wig’, at the upcoming 10th anniversary show.

Writer and director Mandy Lake has passionately pursued documenting this diverse and uniting story for more than four years and notes “What drove me to keep pursuing this project was the unwavering conviction that it was one of those ‘once-in-a-lifetime’ stories that, as a filmmaker, you just know has to be told and would help effect societal change.

“For all its apparent fun, frocks and frivolity, it’ll give me a cunning platform to tackle some deeper, topical issues such as the current suicide epidemic within the LGTBQI+ community.”

“Heart-warming tales, like Bowled Over, help nurture community connection, particularly in regional communities which can sometimes feel isolating for members of the LGTBQI+ community.”

In the spirit of helping those from diverse backgrounds, the production team is offering a training opportunity for an Assistant Editor for an early-career filmmaker from an underrepresented group in the screen industry. Applications for this position are now open until Tuesday, 3rd December 2019 and regionally-based Queensland practitioners are strongly encouraged to apply here.