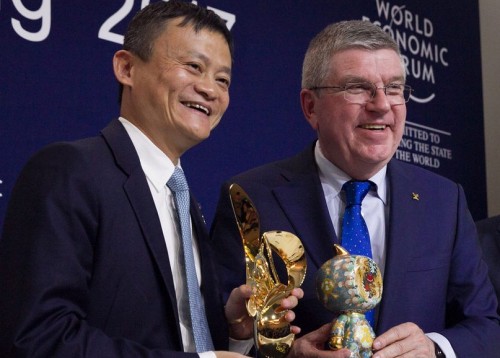 Announced at the World Economic Forum in Davos, Switzerland, earlier this week, the partnership will see Alibaba will become the IOC’s official ‘Cloud Services’ and ‘E-Commerce Platform Services’ Partner, as well as a founding partner of the Olympic Channel.

The partnership, which will last until 2028, was announced by IOC President, Thomas Bach along with Alibaba Group founder and Executive Chairman, Jack Ma and Alibaba Group Chief Executive, Daniel Zhang.

Making the announcement, Bach stated “in this new digital world, Alibaba is uniquely positioned to help the IOC achieve a variety of key objectives outlined in Olympic Agenda 2020, while positively shaping the future of the Olympic Movement.

“This is a ground-breaking, innovative alliance, and will help drive efficiencies in the organisation of the Olympic Games through 2028, whilst also supporting the global development of digital opportunities including the Olympic Channel.”

Ma added “Alibaba’s partnership with the IOC is built on a foundation of shared values and a common vision for connecting the world and enriching people’s lives. We are proud to support Olympic Agenda 2020, using our innovations and technologies to help evolve the Olympic Games for the digital era.”

Through this partnership, Alibaba’s contributions to the Olympic Movement will include:

Commenting on the potential of the partnership, Zhang explained “Alibaba is proud to empower the International Olympic Committee in a game-changing digital transformation, while moving another step closer toward our goal to serve 2 billion consumers.

“We will leverage our experience in serving a young user base to help connect more young people to the Olympic Movement, helping to strengthen our brand through this historic partnership.

IOC Marketing Commission Chair, Tsunekazu Takeda concluded “we are delighted to be working in the long term with Alibaba for the benefit of the Olympic Movement. This strategic partnership underlines the global appeal of the Olympic values and opens an exciting new chapter in this digital age.”

Alibaba is the first company to make a long-term commitment to the IOC through 2028 and the first Chinese company to commit to the Olympic Winter Games Beijing 2022.