International success and multiple installations for Clip ‘n Climb through 2015 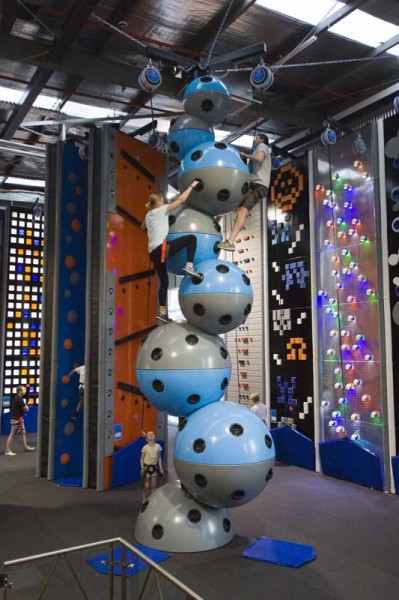 Having enjoyed a successful 2015, The Highgate Group, innovators and developers of Clip ‘n Climb recreational climbing facilities, is looking to continue new installations through the current year.

Its major Australian installation of the year opened at Sky Climb, an expansion of the Sky Zone Trampoline Park in the Sydney suburb of Alexandria, in September.

The first Clip ‘n Climb in Sydney, Sky Climb featured over 30 different climbing features including wall-to-wall climbs as well as free standing elements. The space has been cleverly designed to incorporate the Clip ‘n Climb’s feature Drop Slide, Leap of Faith and Stairway to Heaven elements while still allowing enough space for climbers to move freely between each Clip ‘N Climb challenge.

The physical transformation of the Sky Climb site from an empty shell in to a vibrant climb centre came together over a period of seven weeks and was completed by The Highgate Group's own skilled installers. Each element was shipped from New Zealand in crates and put together by the experienced team to create what The Highgate Group call “a truly unique play space.”

In 2016, The Highgate Group are also set to undertake new install new Clip ‘n Climb centres in Melbourne and on the Central Coast.

Other highlights of 2015 were:

United Kingdom - Clip ‘n Climb centres in Cramlington, Northumberland and Bridlington, Yorkshire both open their doors to the public in time for the Christmas school holidays.

USA - Entre-Prise USA agrees a contract for a Clip ‘n Climb at Wahooz Pinz FEC in Boise, Idaho with opening scheduled for April 2016.

Austria - Clip ‘n Climb opens at the Lowe & Bar Hotel, a former hunting lodge it is just 4 km from the popular Serfaus-Fiss-Ladis ski area and 8 kilometres from Laudegg Castle.

India - manufacturing finishes on equipment for the first Clip ‘n Climb in India at Virginia Mall in Bangalore, with installation now underway..

USA - Warren Buffett attends the opening of Clip ‘n Climb and SkyTrail at the latest Jordans Furniture mega store in New Haven, Connecticut. The internationally famous investor is a major shareholder of the retail giant.

United Kingdom - owners of European based Clip ‘n Climb centres gathered at Clip ‘n Climb Chelsea for a two day conference in London. The meeting was organised by Entre-prises with over 40 Clip ‘N Climb centre representatives attending a series of workshops and discussion groups.

Canada - Clip ‘n Climb International completes research work on a range of challenges for use outdoors as an integral part of the remarkable ‘No Boundaries’ adventure centre designed and developed by WhiteWater Industries.

Malaysia - Clip ‘n Climb is confirmed as a major action attraction at the Science Centre in Penang which is currently undergoing a multi-million dollar refurbishment.

October
South Africa - another first as the first contract in South Africa is signed with Clip ‘n Climb will be the anchor attraction in a family entertainment centre in Cape Town. The facility is scheduled to open in February.

Panama -  following lengthy negotiations Fernando Hurtado, Central and South American distributor for Clip ‘n Climb has made a further sale to increase brand awareness in the southern continent. Clip ‘n Climb will be the principal feature in the atrium of a major new shopping mall in Panama City.

United Kingdom - the brand continues to thrive and expand with the opening of a centre in Stratford and the signing of contracts for Bristol and Cramlington.

Finland - EntrePrises Europe celebrate the opening of the first Clip ‘n Climb in Finland. Located in the high profile Tullintori Mall in Tampere it has quickly become a ‘must do’ for locals looking for healthy challenging fun. A second location in Finland is to be announced shortly.

Australia - following the success of Clip ‘n Climb at the Sky Zone Trampoline Park in Alexandria, a further sale has been agreed for another Sky Zone installation.

France - installers prepare for the opening of two new centres, in Dijon and Lons Le Saunier. Meanwhile the sales team is close to confirming a project in Carpentras in the Provence-Alpes-Côte d'Azur region.

USA - Entre-Prise USA have confirmed a contract with Jim Liggett, Chief Executive and owner of Ropes Courses Inc to supply a Clip ‘n Climb to be installed alongside one of his award winning Sky Trail adventure ropes courses in New Haven, Connecticut.

Germany - the second Clip ‘n Climb centre in Germany opens in the medieval city of Mainz on the banks of the Rhine.

Kuwait - Play Discovery have confirmed a second site in Kuwait in a Joint Venture with a national children’s retail chain.

September
United Kingdom - work begins on the equipment for a new Clip 'n Climb in Bristol, the 15th Clip 'n Climb to open in the UK and Ireland.

The Freeman family, owners of Clip 'n Climb Stockton confirm their intention to open a second Clip 'n Climb at a new FEC in Gateshead. The FEC will also include a soft play area and a trampoline park. It is scheduled for opening in February 2016.

Singapore - A $1.1 million dollar investment in the Home Team Academy (the training institute for various organisations of the Ministry of Home Affairs in Singapore, including the Singapore Police Force, the Singapore Civil Defence Force and the Central Narcotics Bureau) will include an interactive children’s playground and a Clip ‘n Climb Adventure Centre.

India - Master Licensee Aruun Shannkar confirms that Bangalore will be the first location for a Clip ‘N Climb in India. It will be positioned in a glazed atrium at the main entrance to the new Virginia Mall which is currently nearing completion.

United Kingdom - Sky High Adventure opens to the public as the only centre of its kind across the Manchester region featuring an adventure play area for the youngest climbers, an adventurous caving and bouldering area, high eopes for those fearless types and a huge Clip 'n Climb area for the climbers who love a challenge.

August
Australia - The Highgate Group prepares for a busy installation period with major Clip ‘n Climb centres to build in Melbourne and the Central Coast.

July
Kuwait - contracts are signed for the supply and installation of what will be the largest Clip ‘n Climb centre in the Arabian Gulf. The multi activity centre will feature Clip ‘n Climb alongside a trampoline park, soft play, high ropes and indoor football.

United Kingdom - Yorkshire celebrates the opening of the very first Clip 'n Climb in the county offering a stunning arena of 21 separate challenges.

June
China - Entre-Prise China completes the installation of Clip ‘n Climb challenges at a Zhejiang shopping mall. The Vertical Drop Slide and a Twister were chosen to be iconic attractions at the prestigious mall.

China
Entre-Prises China confirm orders for a client in Hefei, the capital and largest city of Anhui Province in Eastern China. A prefecture-level city, it is the political, economic, and cultural centre of Anhui.

April
France - one month after the Dock39 Clos du Chêne opening near Paris, a new Clip 'n Climb facility opened at Climb Up Aix near Marseilles. The Climb Up group (French leader in the climbing gym and indoor leisure climbing market) has chosen, for its sixth climbing gym, Entre-Prises to design a spectacular and innovative Clip' N Climb arena that is dedicated to the fun of climbing for the whole family.

March
Colombia - Clip 'n Climb is featured on the cover of a respected architectural magazine.

Click here to contact The Highgate Group via their entry in the Australasian Leisure Management Supplier Directory.