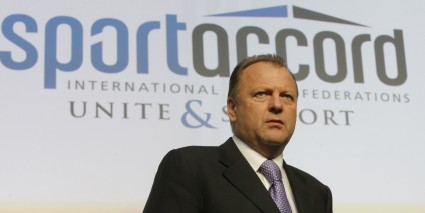 The International Olympic Committee (IOC) has emerged as the clear winner in a battle for influence over international sports federations with rival organisation SportAccord.

A rare public confrontation that began last month with a scathing attack by SportAccord President Marius Vizer (pictured) on the IOC.

As a result, SportAccord, an umbrella organisation for some 100 sports federations, has been isolated with many Olympic federations either withdrawing their membership of SportAccord or voicing their opposition to Vizer's comments public, siding with the IOC.

Vizer had accused the IOC of lacking transparency and blocking new events, calling their system "expired, outdated, wrong, unfair and not at all transparent."

Even after Vizer proposed a meeting with the IOC to clear the air with a 20-point agenda that included major demands in favour of SportAccord’s members, federations continued to drop out of SportAccord en masse.

In an interview with Reuters last week, Vizer, the head of the International Judo Federation, accused IOC President Thomas Bach of pulling federations' strings in the background.

Vizer stated “(the IOC) did not analyse my proposals but just took measures to punish me because I expressed a voice on behalf of me and millions of sports people.

"I was straight and direct and I feel that president Bach has stayed just behind all the story, in the shadows."

Bach, elected in 2013, has emerged the big winner in this conflict against a potential competitor, who was eager to increase his control over federations.

Vizer took over SportAccord two years ago and immediately announced the United World Championships, an event the IOC saw as possible competition to the Olympics.

It never materialised after he opted to break the proposed single event into four smaller events so as not to threaten the IOC.

Federations are the lifeline of the Olympics bringing the big names to the Games, making them the IOC's most valuable stakeholder.

A lack of top athletes would mean no top sponsors nor top broadcasting deals.

Vizer's position has been severely compromised with many federations saying he is no longer speaking on their behalf and demanding an apology to the IOC.

Peru's Olympic Committee, who had been set to organise SportAccord's 2017 World Combat Games in Lima, also pulled the plug on Sunday, telling Vizer they were siding with the IOC.

The World Combat Games have lost five of six Olympic sports, with only judo, the federation Vizer heads, remaining.

Yet alleged pressure is not enough to lead federations to side with the IOC. It is also the IOC's financial structure that ensures millions of dollars are distributed to them after each Olympics.

Just under $300 million was divided between the 28 federations after the 2008 Beijing Olympics and that figure went up to a staggering $519 million for 26 sports after London 2012 due to even greater broadcasting deals.

Rights deals have continued to grow and the Rio de Janeiro 2016 Games will flush further cash into their coffers.

Many Olympic federations depend on these revenues for their entire existence in the four-year cycle between Games and this cash injection is something neither Vizer nor SportAccord can replace.

Representing Olympic and non Olympic federations, SportAccord has never been seen as vital for major sports but minor and non-Olympic federations used that platform - an annual convention and a string of multi-sports events - to increase global exposure and tap into new revenue streams.

As of this week, Winter Olympics sports federations (AIOWF) left SportAccord suspending any collaboration with the organisation.