International Day of Yoga marked around the world 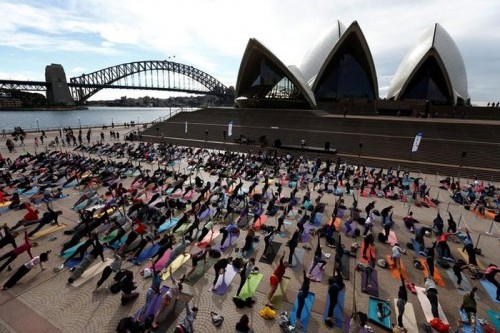 From the Himalayan region of Ladakh to the forecourt of the Sydney Opera House, tens of thousands of people joined Indian Prime Minister Narendra Modi yesterday to celebrate the fourth International Day of Yoga.

Having pushed for the annual event to be held worldwide after he came to power in 2014, Prime Minister Modi stated “from Tokyo to Toronto, from Stockholm to Sao Paulo, Yoga has become a positive influence in the lives of millions.

“In a world where non-communicable diseases, stress and lifestyle-related ailments are rising, yoga can play a central role in mitigating these diseases to create a healthy mind and body.”

In India, more than 50,000 people joined Modi in performing yoga on the lawns of Dehradun’s Forest Research Institute in the Himalayan foothills of the northern state of Uttarakhand.

The global industry centred on the ancient physical and spiritual discipline is estimated to be worth around US$80 billion.

Image: International Day of Yoga marked on the forecourt of the Sydney Opera House.