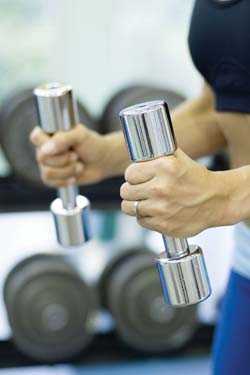 A new survey by Canstar Blue has shown that nearly 90% of Kiwi gym-goers engage in regular exercise as part of their commitment to a healthy lifestyle.

However, despite ambitious fitness goals, close to half of Aucklanders surveyed have admitted to giving up on their New Year’s resolution - to start an exercise programme - within weeks.

Men (34%) are slightly more likely to falter in their fitness resolutions than their female counterparts (29%). While in pursuit of exercise goals, more than half (57%) of women prefer to attend group exercise classes, compared to working out alone with weights.

Gym goers are attending more frequently, with almost two thirds (65%) of those belonging to a gym, attending more than three times a week, up from 55% in 2013. Auckland gym members have proven to be the most avid with 71% hitting the gym on a regular basis.

An overwhelming majority of New Zealanders are now reading the terms and conditions before signing up for a gym, says Canstar New Zealand General Manager, Derek Bonnar.

He explains “awareness of contractual obligations is on the rise (2014: 81%, 2013: 73%); however, despite reading the terms, many people are still being caught out by ongoing contracts. If they are not paying a lump sum up front, it is important that people understand what they are getting into.”

This year, Les Mills New Zealand has knocked self-service gym chain, Jetts off of the top spot for overall satisfaction.

Commenting on this achievement, Bonnar adds “Les Mills has come out on top of the survey; their longevity in the market, consistent innovation, topical and relevant marketing and high standards of service have rung true in the stakes for customer satisfaction.”

However, 57% of Aucklanders opted for self-service operators, trading away high end service in favour of convenience, price and 24 hour access.

Of those that made the switch, 87% cited flexibility of access, while 71% did it to save money and more than two thirds changed to a self service provider to avoid the gym scene.

Canterbury: Cantabrians are the most likely to read the terms and conditions before signing up for a gym (90%), most likely to include regular exercise as part of a commitment to a healthy lifestyle (93%), least likely to attend the gym less than once a fortnight (13%) and the least likely to be caught out by an ongoing contract (20%).

Respondents, who pay a membership fee to regularly attend a commercial gym, that is part of a chain, were asked to rate their gyms across nine categories:

1. Value for money
2. Access (including opening hours)
3. Equipment and facilities
4. Flexibility of membership (including starting and stopping, use away from home gym)
5. Group fitness (including classes)
6. Range of special offers (including no joining fee, trial pass, bring a friend for free)
7. Staff availability
8. Social atmosphere
9. Overall satisfaction with the gym

Canstar Blue regularly surveys 2,500 New Zealand consumers to measure their satisfaction across a range of products and services.

The outcomes reported here are from the 398 people within the survey group who regularly visit a commercial gym that is part of a chain, where they pay a membership fee. The online survey has a margin of error of +/- 4.90%

To view the full results of the survey go to www.canstarblue.co.nz