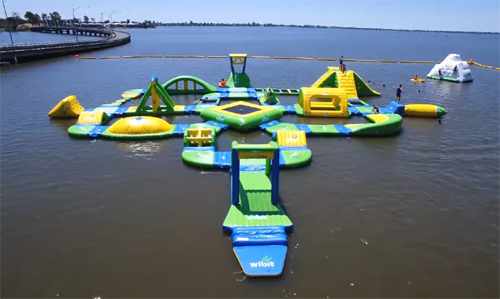 The growing popularity of inflatable aquatic playgrounds has seen the opening of a new waterpark at Lake Mulwala on the Murray River.

The 50 metre² aquatic adventure park, known as Aquazone@LakeMulwala, opens this weeked and will operate until late April next year.

In developing the attraction, Aquazone@LakeMulwala Managing Director Deb North was influence by the popular AquaSplash open water inflatable playground at Broadwater Parklands on the Gold Coast.

Having recently gained approval to operate the business under a seasonal licence agreement from Moira Shire Council, North said the business would employ up to 40 staff during Yarrawonga-Mulwala’s peak tourist season, telling local newspaper the Border Mail “we’ll be a strong employer in the summer months (and) we’ll provide career opportunities in the aquatics industry and the customer service sector.”

If successful, North plans to expand the attraction stating “every year we’ll add independent pieces and grow the structure a bit more.”

North said she had worked with Goulburn-Murray Water, NSW Maritime and Moira Shire to get the concept off the ground, adding “I don't know of any other situation where three large government organisations have actively worked together through the logistical challenges with private enterprise to bring a tourist attraction to the region.”

Lifeguards at the playground have been trained as part of the Respect the River campaign,

Users aged 8+ must have a minimum swimming ability and wear a high-visibility wristband, headband and supplied life jacket.

Lake Mulwala is a man-made reservoir created through the construction of the Yarrawonga Weir across the Murray River, is located between Bundalong and Yarrawonga in Hume region of Victoria and Mulwala in the Riverina region of NSW.

Aquazone@LakeMulwala is located between the Mulwala bridge and the Yarrawonga skate park. 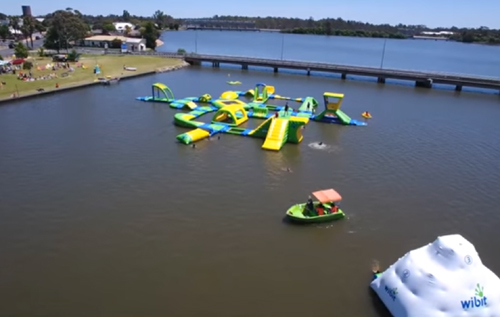 The Wibit installation marks another success for the company and Australian distributor Robert Savell of Hydrocare Pool Services.