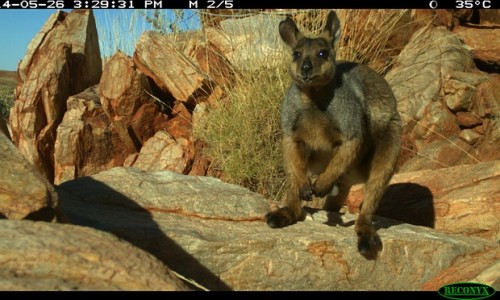 Efforts to aid a threatened species of wallaby has been thrown a lifeline by the work of Indigenous rangers in a remote part of Western Australia.

A three-year program to monitor and sustain an isolated population of black-flanked rock wallabies has started to show positive results, with sensor-sensitive cameras showing that a translocated population has successfully bred a new generation of joeys.

The project has utilised the skills of the Martu people, traditional owners of a large tract of land in central Western Australia that includes part of the Great Sandy Desert.

Nearly 60 Martu rangers have been involved in the monitoring and movement of the wallabies to ensure that a single fire or disease didn’t wipe out the entire isolated population.

The rangers have introduced a new ‘mosaic’ fire-burning regime to reduce fuel loads for potential bushfires near the wallabies. Meanwhile, traditional techniques have been used to track and trap the marsupials for research.

In 2013, 26 of the wallabies were moved from the Calvert Ranges, also known as Kaalpi, to Durba Hills, known to the Martu as Pinpi.

A trapping program that finished in late August involving rangers from the community of Jigalong showed that the released population is in “exceptional” condition. The initial Calvert Ranges group, of which 46 wallabies were trapped, were also found to be in good shape.

The black-flanked rock wallaby is an agile, shy marsupial that usually doesn’t stray far from the rocky outcrops it dwells in. However, it has suffered from a huge population slump since European arrival and is now found in just a handful of isolated spots in Western Australia.

Feral cats now pose one of the greatest threats to the wallaby. The Martu aided with the aerial baiting of cats in July, with subsequent monitoring  discovering just two cat paw prints in the area where the wallabies live.

The Martu, which was one of the last Indigenous groups in Australia to make contact with Europeans, has partnered with the Western Australian Department of Parks and Wildlife, Nature Conservancy Australia and BHP Billiton to help revive the fortunes of the wallaby.

Zan King of Kanyirninpa Jukurrpa, the Martu’s cultural organisation, stated “this project has been extremely successful, it has really helped the chances of survival for this wallaby.

“The latest results of the monitoring show that the joeys are doing very well.

“This is a fantastic partnership of western science and traditional skills of tracking.

“The rangers have an increased sense of pride and empowerment and it brings money into the community.

“A lot of kids at school now have aspirations to the rangers, which is very positive.”