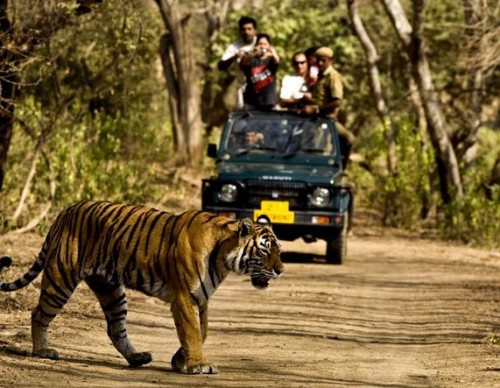 India's Supreme Court has suspended tourism activities in core areas of tiger reserves as the country struggles to stem the dwindling numbers of the endangered wild cats.

The recent order by the Supreme Court in New Delhi came in response to a public interest complaint from wildlife activist Ajay Dubey, who urged that tourism be restricted to a buffer zone on the edge of reserves to protect the animals.

Dubey, saying he sought a balance between conservation and the tourist industry, claimed various state authorities were permitting rampant construction of hotels, resorts and other projects in the parks.

Siddharth Gupta, the counsel for the complainant, told AFP "the court has ruled that the core zones in the tiger reserves will not be used for tourism," adding that a final order is still awaited on the case.

Tiger reserves are areas notified by the Government of India for the protection of the animal and its prey, and are a key attraction to foreign and domestic tourists in India.

Reserves such as the Jim Corbett National Park attract large numbers of safari tourists who pack into four-wheel-drive jeeps and head along bumpy jungle paths in the hope of spotting one of the estimated 1,706 tigers in India.

The court's order was, however, slammed by some wildlife protection groups who said the ruling would benefit poachers.

"It is like closing the doors and throwing away the keys. Without the eyes and ears of people, the poachers are going to have a field day," Belinda Wright of the non-profit Wildlife Protection Society of India told AFP.

India is home to half of the world's rapidly shrinking wild tiger population but has been struggling to halt the big cat's decline in the face of poachers, international smuggling networks and loss of habitat.

The country has seen its tiger population plummet from an estimated 40,000 animals in 1947, when it gained independence from British colonial rule, to just 1,706 in 2011, according to an official census.