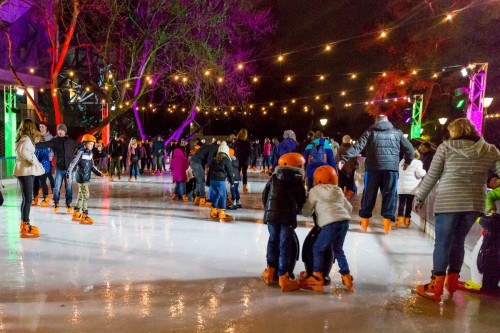 A series of open air ice skating and winter activity events are currently in operation at key locations in Brisbane, Sydney, Canberra, Perth, Melbourne and Adelaide.

Operating from mid-June to late-July, Ice Rinks Australia has launched ‘Skating At’ events on portable ice rinks at Sydney’s Cathedral Square, on the water’s edge in Sorrento in Melbourne, in Brisbane’s King George Square, at Perth’s Elizabeth Quay and ‘In The City’ at Canberra’s Garema Place.

Each Skating At event will host a wide range of snow and ice related activities including open-air ice--skating, falling powder snow, interactive fun and games and professional ice-‐skating performances. Some of the venues will also have ice slide rides and pop up food stalls while others will have inflatable pop up giant slides and jumping castles, tube dudes, snow domes and igloos.

Introducing the concept, Stoller explains “we’re very excited to be bringing the ‘Skating At’ concept to Australia.

“For many Australians this will be their first experience of ice and snow (while) for others it will be a chance for them to re-live some of the fun snow and ski experiences they’ve had on holidays without the added pressure of international travel and the huge expenses associated with this.”

“There is something completely magical about ice skating on an open air rink with falling snow dusting your hair - blink and you’ll feel like you’re at the Rockefeller Center in New York or Hyde Park in London.”

According to Stoller almost anyone can have a go at ice skating.

He states “with our warm climate in Australia ice skating, particularly in the open air, is not something that most people do all the time, but it’s awesome to try new things and is loads of fun, even if you’re a bit wobbly at first.

“It’s not that difficult really and we have staff on hand to assist novice skaters. This year we are launching ‘Kanga’ a push along aid to help anyone get their balance especially if this is their first try at ice-skating, plus of course there are lots of other fun activities to do.

“The rinks are accessible to wheelchairs and it’s a great activity for anyone aged from three to 93 to do.”

For more information on the attractions go to www.skatingat.com.au

Launched in 2007, IRA has built ice rinks nationally including the challenges of Alice Spring’s 40 degree heat to the salt and sand on Bondi Beach and in five of Australia’s premiere stadiums to entertain Global Ice Hockey Heavyweights.