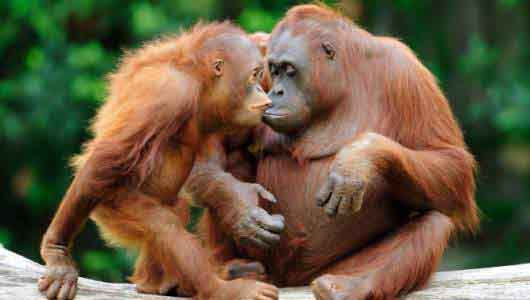 Zoos South Australia is being criticised by South Australian ice cream maker Golden North for having ditched the Adelaide company in favour of a multinational, despite the local company avoiding use of palm oil in its foods.

Golden North Marketing Manager Trevor Pomery told the ABC that the Adelaide company spent a year eliminating palm oil from its products and Adelaide and Monarto Zoos had heavily promoted their Golden North treats as being free of palm oil.

However, Zoos South Australia has now struck a deal to sell Streets ice creams despite the fact that the international brand's products contains palm oil.

Production of palm oil is widely considered a factor in destruction of rain forests, the habitat of orangutans and other endangered species Zoos South Australia promotes.

Pomery told the ABC that he found out in April that Zoos South Australia was in discussion with Streets, stating "we still had just over a year to go on our contract.

"We went away, put together a new offer and then we got that approved and were ready to go to the zoo with this new offer.

"We then got a letter on 3rd July telling us we were going to be out."

Pomery said Golden North had gone to lengths to achieve an environmental positive with its ice creams and the loss of the zoos deal came as a blow, adding "(We are) very frustrated and somewhat disappointed in that we put in a lot of time and effort to become palm oil-free.

"I don't want to go on a moral high ground, but they've backflipped."

Bensted told the ABC "it does have a financial benefit to the zoo and I won't shy away from that, and it is a significant component.

"I don't need to explain that Zoos SA has obviously had some financial challenges in the past."

Bensted said Streets had promised to be mindful of environmental concerns, adding "by 2020 all of the palm oil that they buy globally will come from certified sources.

"So we wanted to make sure that we were using our buying power to try and drive different behaviour and sustainable behaviour in the people that we make purchases from."

Adelaide Zoo and its Monarto open range zoo near Murray Bridge have been through troubled times and in 2011 were given a financial lifeline of millions of dollars from South Australia taxpayers to help cope with a rising debt of more than $24 million.

Despite getting two giant pandas from China, Adelaide Zoo had been falling short of the sponsorship and visitor numbers needed to cover its rising operating costs.

Bensted was appointed in 2012 with a brief to turn the zoos' financial fortunes around.

Independent Senator Nick Xenophon has called on Zoos South Australia membersto urge the board to reverse its decision, stating "what the Adelaide Zoo has done is a betrayal of their campaign on orangutans, it's a betrayal of their conservation principles and it's betrayed an iconic South Australian business which has gone out of its way to do the right thing, to remove any palm oil from its supply chain.

"Instead they're doing business with a multinational that still uses palm oil in their ice creams."