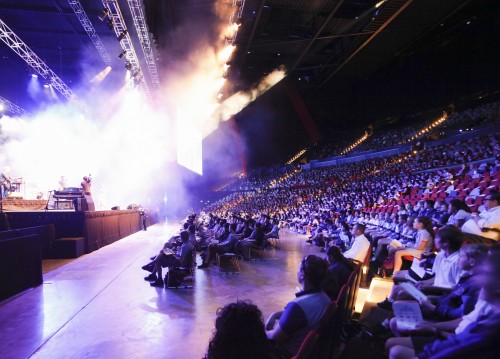 Set for its official opening in December, the International Convention Centre Sydney (ICC Sydney) is currently running through a series of test events that this week included a Talent Development Project (TDP) concert which tested the venue’s theatre.

The invite-only TDP Live concert, was part of ICC Sydney’s commissioning program and was attended by 3,000 school children and friends of TDP, all of whom were among the first to witness ICC Sydney Theatre and the team in action.

Current students from the TDP and successful alumni took to the stage, including winner of The Voice 2014, Anja Nissen; Amanda Harrison, known for originating the role of Elphaba in the Australian production of Wicked; and Trevor Ashley, star of the world premiere of Priscilla Queen of the Desert.

ICC Sydney Chief Executive Geoff Donaghy said the concert was a great opportunity to foster the future of talent in Australia and showcase the new home of entertainment in Sydney.

Dongahy explained “we’re were thrilled to host this show with the amazing TDP performers.

“The concert put ICC Sydney Theatre’s amazing facilities to the test, including Australia’s largest purpose-built stage area, which at 44 metres wide, is up to twice the size of many Australian live concert venues.

“Attendees were also blown away by stellar audio visual technical equipment, and the innovative fan-shaped design which provides unobstructed views for up to 9,000 people when at capacity.” 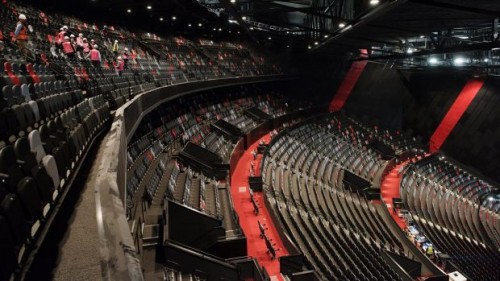 Explaining that ICC Sydney is the centrepiece of the $3.4 billion, 20-hectare transformation of Darling Harbour, Donaghy added “our performance spaces, and the team who work in them, are essential to the precinct’s integrated convention, exhibition and entertainment offering, which will further emphasise Sydney as one of the world’s most leisure and business destinations.”

TDP Founder and Artistic Director, Mary Lopez said that partnering with AEG Ogden, the operating company of ICC Sydney, provides an exciting platform for their talent.

Lopez explained “as the most successful youth training and development program in the Australian music industry, we’re keen to create new opportunities for the next wave of Aussie talent. TDP Live has given them the chance to be among the first to play at one of Australia’s leading venues.

“The concert demonstrated the fantastic capabilities of our talent and Sydney’s new home of entertainment - ICC Sydney, which will host some of the most memorable shows in our country, starting with our musicians, and followed by international acts such as Keith Urban and PJ Harvey in the coming months.”

This weekend will also see ICC Sydney stage a public open day, inviting locals and visitors alike to explore the state of the art integrated convention, exhibition and entertainment precinct.