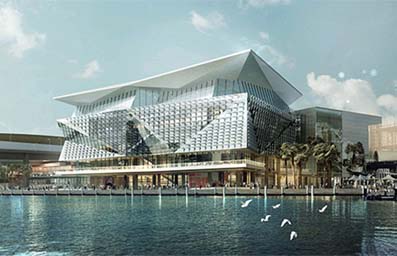 The management of ICC Sydney, Australia’s largest and first fully-integrated convention, exhibition and entertainment centre, are preparing for an opening in December of this year.

Underpinning Sydney’s place as one of the world’s most desirable meeting and major events destinations, the showcase international venue is the epicentre of a 20-hectare transformation of Darling Harbour by the NSW Government to highlight Sydney as the first choice in Australia and the Asia Pacific region for the major events industry.

ICC Sydney’s contemporary design celebrates Sydney’s temperate weather and natural environment with sweeping views of the harbour and city skyline through glass facades and from balconies throughout the venue.

Its smart design in the heart of Sydney provides 70 event spaces and allows for three conventions to run consecutively, each with their own plenary, break out space and catering areas. Australia’s largest ballroom sits proudly above the convention centre. It will seat up to 2,000 guests and its balcony provides spectacular harbour views.

As the physical venue looks more and more like its architectural renders each day, the operational preparations of venue manager AEG Ogden are also on track.

ICC Sydney Chief Executive and AEG Ogden Group Convention Centres Director, Geoff Donaghy said the team was in the final planning stages of the test events that will commission every centimetre of the building.

Donaghy explained “as the ICC Sydney team continues to build, the operations team is implementing plans to launch world leading technology as well as exceptional culinary and professional business services that will deliver the ultimate in business event experiences.

“When ICC Sydney opens, the city will experience a real paradigm shift in how it enjoys events, with a multitude of dynamic venues opening within an integrated precinct, event delegates will have numerous small and impromptu meeting places to add to formal meeting spaces.”

Donaghy adds that ICC Sydney will offer striking design, unrivalled sound and visual technology and an amazing variety of spaces and places to explore.

He comments “along with three impressive theatre venues, ICC Sydney will be home to a 5,000 metre² open air event deck, a 2,400 metre² multipurpose event space, a 2,000 seat ballroom and seven exhibition halls, all folding into the beautiful Tumbalong Park which will be expanded by 3,000 metre².

“All venues will have world class staging and technical facilities, with sound and visuals brought to life through high definition screens, large scale projection and superior audio equipment.

“By offering the ultimate experience, we hope to reinforce Sydney’s reputation as one of the most desirable destinations in the world.”

More than a world class venue and management team, ICC Sydney also boasts a stellar location. Situated at the core of the city’s knowledge economies, ICC Sydney has the CBD to its east, a new financial services district to its north and institutions of learning plus the nation’s number one startup company post code to its south.

The precinct is also a short walk to media and technology companies to is west.

ICC Sydney is being delivered by the NSW Government in partnership with Darling Harbour Live, comprising Lendlease, Hostplus, Capella Capital, AEG Ogden and Spotless FM, as part of Darling Harbour’s most exciting renewal in 25 years.