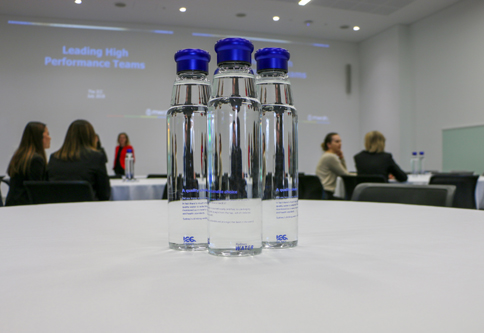 Reflecting its ongoing commitment to reducing its ecological footprint, the International Convention Centre Sydney (ICC Sydney) has announced that more than a million plastic water bottles have been saved through its partnership with Sydney Water.

By promoting the use of Sydney’s tap water at events and using co-branded, reusable glass bottles in all meeting rooms, the initiative has significantly decreased bottled water consumption on site while providing great tasting water to delegates and visitors. It has also saved the equivalent of 12,900 kilograms of plastic from being produced.

ICC Sydney Chief Executive Geoff Donaghy said the Corporate Social Responsibility (CSR) partnership between ICC Sydney and Sydney Water is delivering results for clients, the community and the environment, advising “we follow a mantra of ‘reduce, reuse, recycle’ and as a harbourside venue, we are very conscious of our environmental impact and particularly the potential harm of plastic to aquatic life.

“It’s imperative for large scale venues to operate in a sustainable manner for the sake of the environment and we are exceptionally pleased that we have already produced such positive results.

“When you consider that saving a million plastic water bottles is the equivalent of filling 2,900 wheelie bins, the outcome is substantial. However, our work here is not done. We are constantly looking for ways to minimise our environmental impact and what else we can be doing to drive change.”

Sydney Water Managing Director, Kevin Young congratulated ICC Sydney on implementing the initiative across the venue’s operations adding “ICC Sydney is a great example of how organisations and their operations can deliver positive environmental outcomes through the use and promotion of tap water. Reaching this milestone number is a testament to ICC Sydney and the entire team’s dedication to reaching their sustainability goals.

“It is also a testament to our staff at Sydney Water who produce some of the highest quality drinking water in the world, day-in, day-out.

“We look forward to continuing our relationship with ICC Sydney and delivering even greater results in the future.”

Since launching, the partnership between ICC Sydney and Sydney Water has also:

• Saved more than 700,000 kilowatts of electricity
• Saved 1.5 million litres of water and an estimated 150,000 litres of oil from associated activities in manufacturing the plastic bottles
• Reduced greenhouse gas emissions by over 500 tonnes, the equivalent of keeping 110 cars off the road for a year.

The results from ICC Sydney’s partnership with Sydney Water reaffirm the venue’s commitment to operating in an environmentally responsible and the role it has in setting a new industry bench mark for venue sustainability.