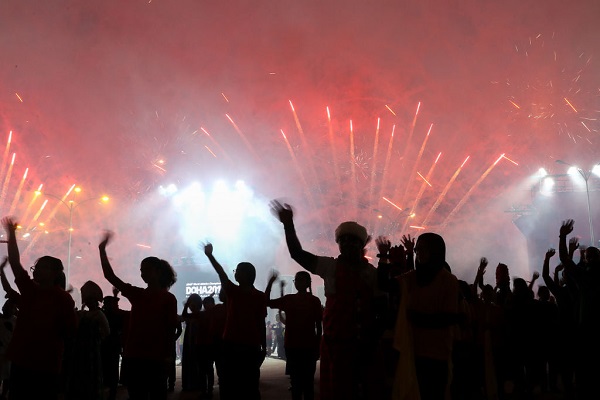 The opening ceremony of the International Association of Athletics Federations’ 17th World Athletics Championships has held at the Khalifa Stadium in Qatari capital of Doha.

Staged last evening, the event marks the commencement of the largest sporting event ever held in an Arabian Gulf nation.

Running until Sunday 6th October, a total of 2,000 athletes from 208 countries and territories are competing in the championships, which are seen as an important staging post as Qatar prepares for the challenge of hosting football's World Cup in 2022.

The ceremony was attended by the Personal Representative of the Amir of Qatar, Sheikh Jassim bin Hamad al-Thani; International Olympic Committee (IOC) President, Dr Thomas Bach, members of the IOC; IAAF President Lord Sebastian Coe, members of the IAAF, and a number of Olympic and sport figures, heads of diplomatic missions accredited to Qatar and senior officials and guests of the tournament.

With the bulk of the competition taking place at the air-conditioned Khalifa Stadium, most athletes will be shielded from the heat in Doha.

However, that was not the case for the women's marathon, started by Sheikh Jassim, immediately after the ceremonies, at midnight local time.

Despite the late start, 28 of the 68 starters withdrew in gruelling conditions with temperatures of 32C and humidity reaching over 70%.

Organisers decided to go ahead with the event in its scheduled slot despite fears that the conditions might not be conducive for marathon running.

Larger than usual teams of paramedics were on hand and an abundance of water stations populated the course on Doha's Corniche waterfront.

Preparations for the race had been endorsed by one of the world’s foremost road race medical coordinators, Chris Troyanos, Executive Director of the International Institute for Race Medicine.

Advising that the approach to runner safety and rapid response to all locations along the course matched the challenging weather conditions, Troyano said he was “comfortable and confident” about the measures in place to protect elite athletes competing in these hot and humid conditions. 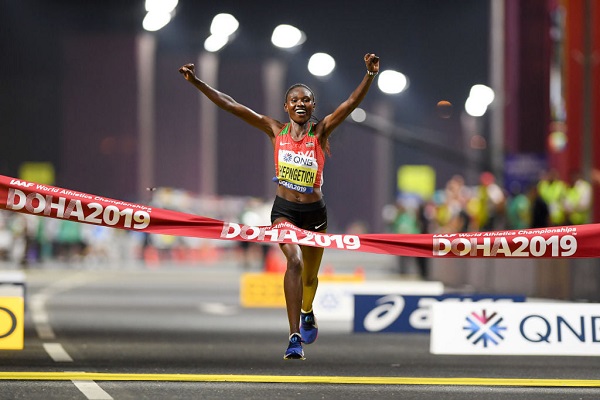 He added “every endurance event around the world needs to understand climate change and what we are facing in terms of extremes of temperature in various locations.

“Medical planning and coordination needs to keep up with the demands of our industry - endurance events, especially as it relates to medical coverage and the safety of our athletes.

“When you look at last night’s heat and humidity, were conditions difficult? Yes. Of course, but the IAAF planned for that concern. Working with the local organising committee, Doha medical leadership and their public safety partners they did a tremendous job of the planning for this event and the medical coverage.”

Troyanos, a certified athletic trainer (ATC), is one of several leading experts in the field that was consulted to ensure the endurance races were conducted safely in Doha.

Asked if he believed the endurance races should go ahead in these weather conditions, Troyanos added “I’ve had this question asked of me many times. If you don’t have the assets, the medical staff and the support, not just from the organising committee and the IAAF but from the local public safety organisations, you can’t, and should not be hosting events in these conditions. When you look at the field size, the fact we were dealing with an elite athlete population, and our medical plan, I knew we would be able to handle the challenges of the weather conditions.

Amid reports of slow ticket sales earlier this week, organisers of the World Athletics Championships denied that migrant workers and children were to be used to fill empty seats.

With the Guardian newspaper advising of the likelihood that large numbers of free tickets would be given away to migrant workers and children who will be bussed in by organisers, a spokesperson told SportBusiness that free tickets were not being handed out, but that children were being offered a 20% discount on tickets as part of an outreach campaign to younger fans.

Reports suggested that only 50,000 tickets had been sold across the 10 days of action.

Images: Athletes during the opening ceremony of the 17th World Athletics Championships in Doha (top) and Kenya's Ruth Chepngetich wins the women's marathon (below). Images courtesy of IAAF/Qatar Olympic Committee.