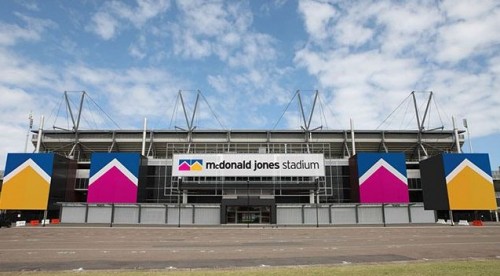 After a sponsorship search for Newcastle’s Hunter Stadium lasting more than two years, Venues NSW has announced that builder McDonald Jones Homes has agreed a five-year deal to become the new naming rights sponsor of the Stadium.

Home to A-League club Newcastle Jets and NRL’s the Newcastle Knights, the venue will be known as the McDonald Jones Stadium.

Described as “the jewel in the Newcastle sporting precinct crown”, the deal gives the Newcastle-based builder the first option to renew its deal.

The Stadium had not had a naming rights sponsor since 2011 when Energy Australia held the venue’s naming rights.

Announcing the sponsorship, NSW Minister for Sport Stuart Ayres said the new sponsorship deal will be a welcome addition to football fans of all codes with funding to be reinvested back into operation of the 33,000 capacity venue.

Minister Ayres stated “the NSW Government has invested more than $100 million redeveloping the Western and Eastern Grandstand and installing a new playing surface and now this naming rights deal will ensure McDonald Jones Stadium continues its hosting capabilities for many years to come.”

Venues NSW Chairman John Quayle said having a local company take up the naming rights sponsorship was a great outcome, adding “this sponsorship, I believe, is also a sign of the positive future this sporting precinct has for Newcastle and the Hunter.”

More than 1.2 million fans have attended events at Hunter Stadium in the past four years while the wider venue precinct is soon to benefit from a new $10 million Hockey Centre of Excellence.