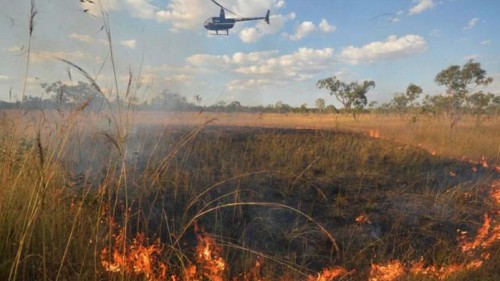 An immense bushfire in the north of Western Australia is now burning in a wildlife sanctuary described as 'a showcase for conservation in northern Australia.'

Fire crews and volunteers have been battling the blaze, which has burnt through a million hectares of land, since late September after it was sparked by a lightning strike at Ellenbrae Station in the Kimberley.

Despite their best efforts in hot, blustery conditions, the fire has moved steadily toward the Mornington-Marion Downs Wildlife Sanctuary, breaking containment lines on Thursday with strong winds fanning the flames into the protected area.

The Australian Wildlife Conservancy (AWC) said the Mornington-Marion Downs area "capture a high diversity of wildlife including critically important populations of threatened species such as the Gouldian Finch, the Purple-crowned Fairy-wren and Northern Quoll."

It added "the fire is now burning on Marion Downs Wildlife Sanctuary, where various teams are now re-deploying their resources. The AWC team are surveying the fire front this morning to determine a plan of attack going forward, which will likely entail back burning and aerial incendiary work.

"There is at least 1-2 weeks of effort still ahead of crews to tame this massive fire, which has already burnt over one million hectares."

The Western Australian Department of Fire and Emergency Services (DFES) said a team of seven firefighters from Perth has flown up to the firefront to help co-ordinate the effort to fight it, working alongside pastoralists, indigenous groups, Kimberley Land Council Rangers, Australian Wildlife Conservancy, and Parks and Wildlife officers.

The fire is burning out of control and DFES said crews are battling the blaze's southern end while monitoring the north.

The fire comes ahead of what is anticipated to be another intense bush fire season in Perth and the South West following deadly blazes in Yarloop, earlier this year, and Esperance in 2015.

The Department of Parks and Wildlife's annual report has revealed Western Australia failed to meet prescribed burn targets every year since 2009 and has had a sharp decline in frontline fire employees since the mid-1980s.

The report shows the average area subject to annual controlled burns in the South West has decreased more than 70% in the past 50 years.

Amid clear spring weather, local authorities are now scrambling to tackle prescribed burns, with several conducted this week around Perth.