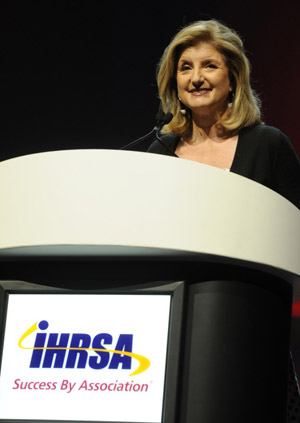 Without embracing wellbeing, individuals can never be truly successful and businesses'  bottom line will suffer, according to Arianna Huffington in her keynote address at the International Health, Racquet & Sportsclub Association (IHRSA) 2015 Convention in Los Angeles yesterday (11th March).

Huffington - who remains President and Editor-in-Chief of Huffington Post Media Group, having sold the company to AOL for US$315 million - shared an enlightening IHRSA keynote presentation under the theme ‘Redefining Success: The Third Metric That Can Benefit Your Bottom Line.’

The Greek-born, English educated founder of The Huffington Post talked about the ‘third metric’ and her mantra for personal and professional success. Both are the subject of her latest book Thrive: The Third Metric to Redefining Success and Creating a Happier Life.

Huffington’s third metric defines wellbeing, wonder, wisdom and willingness as its cornerstones. Society, she said, has become too obsessed with money and power as measures of success, but to only focus on these aspects “is like sitting on a two-legged stool, you will soon fall off.”

Her own fall came in 2007, when Huffington collapsed in the office and woke in a pool of blood. “I asked myself ‘Is this really success?’” she reflected, adding that from that point forward she began her journey to the discovery of the third metric.

Huffington observed that a sea change in business is starting reflect the notion that wellbeing has a major impact on performance and ultimately – a company’s bottom line.

She explained “2014 was the year of CEOs coming out as meditators", noting that many of the world’s most powerful business leaders have recently partly attributed their success to meditation and a decent night’s sleep.

Huffington considers the health and wellbeing of her employees to be of paramount importance. As a result, she revealed, nap rooms have been installed at The Huffington Post and in the company’s New York offices, meditation, breathing and yoga classes have been introduced.

She also shared her belief in sleep, suggesting "taking care of ourselves begins with sleep. There is something about our culture that treats sleep deprivation like a badge of honour.”

The path towards wellbeing needs to be taken at a gradual pace, Huffington believes, also advocating a sanguine approach to life itself.

She conclueded “we feel the need to become much more relaxed about the challenges that arise every day.

“What is amazing is that looking back on your life, some of your biggest heartaches lead to some of the best things that happen to you.”