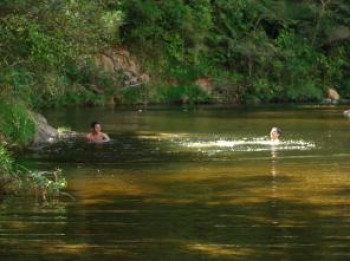 Horizons Regional Council has increased their annual swim spot monitoring programme from 17 sites to over 80, to run alongside a complementary summer swim spot campaign that will help inform the public about potential health risks and highlight the Region’s fantastic recreational sites enjoyed by the public every summer.

Horizons Chairman Bruce Gordon says from Ruapehu, Whanganui and the Manawatu, to Horowhenua and Tararua, the Region's numerous swim spots offer some of the country’s most stunning scenery and excellent picnicking, camping and bush walking opportunities for locals and visitors alike.

Gordon explains “there is much media and public commentary around our waterways, many of which says you can’t swim in our Region.

"This is contradictory to our science, and perhaps more importantly to the thousands of our community members who enjoy our beaches, lakes and rivers every summer.

"We recognise the importance of recreational water users being well informed about the potential health risks at these sites, and that is why we have expanded our programme. Every week from 29th November until 30th April 2017 we are monitoring the health of over 80 swim spots.

"Water samples from each site are sent to an independent accredited lab for testing. Results are received within 48 hours and are updated weekly on Horizons’ dedicated Safe Swim Spots’ webpage. There, an interactive map shows each of the swim spots marked by a red, amber or green location maker to indicate that week’s bacteria results."

Horizons Science and Innovation Manager Abby Matthews says the traffic light system is part of the Ministry of Health and Ministry for the Environment guidelines that provide guidance to Councils and District Health Boards regarding how they should act when certain levels of indicator bacteria or algae are detected.

"If a site falls into the red category, information is provided to the public that the site is considered unsuitable for recreational use.

"Gravel bed river sites and lakes will also be tested for Cyanobacteria, which is an algae that can be toxic. Horizons will be keeping an eye on this during summer and also reporting these results on the website. However, we do urge public and their animals to stay out of the water if they are at a river and see black mat-like slimy growth on the stones that may also be musty smelling."

Gordon says that in addition to their own website, Horizons’ 80 plus monitored sites can also now be found alongside New Zealand’s 16 regional and unitary councils’ data on Land, Air, Water, Aotearoa’s (LAWA) new ‘Can I swim here?’ website feature.

LAWA is a collaboration between the councils, the Cawthron Institute, and Ministry for the Environment, with support from the Tindall Foundation.

Gordon added "we hope that our increased monitoring programme and campaign will reinforce the message that throughout summer most of our Region’s popular swim spots are safe for swimming.

"We also hope that it will dispel some of the myths, such as that rivers should be swimmable 100% of the time.

“Unfortunately natural occurrences, such as high flows and floods, means this will never be the case.

"Water quality is just one factor in a number of potential health risks. We ask the public to be aware of hazards such as unstable banks and cliffs, submerged logs, and tsunami warnings and rips at beaches.

"Another thing to remember is that as sampling is weekly, the results may not always reflect the water quality for the whole week, especially if it has rained. A general rule is if the water looks clear and it’s three days after rainfall, you should be good to go."