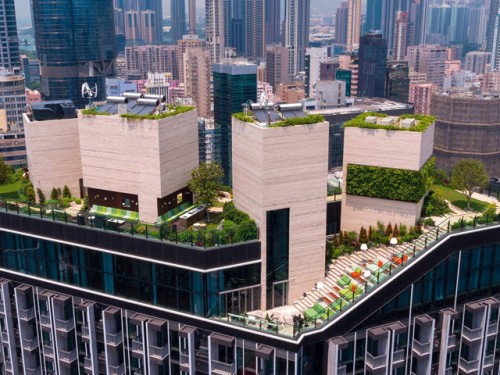 The recently completed Skypark development in the Hong Kong suburb of Kowloon is making the most of its roof area with an imaginative rooftop garden and event space along with an indoor clubhouse complete with swimming pool, gym and library.

With limited living and open space in Hong Kong, developers are making the most of roof spaces with for gardens and sporting space. However, the Skypark development has developed as a social space for the tower’s residents.

Completed in March, the block offers a range of studio and one-bedroom apartments that cater to the millennial demographic. 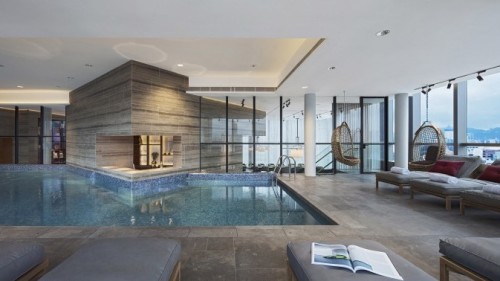 Situated on the 28th storey of the central Kowloon building, The Aurora clubhouse offers an indoor swimming pool, poolside bar, library, and gym.

Moving from the interior of The Aurora clubhouse, users ascend to The Lawn garden area via the large exterior steps known as Sky Stairs.

The Lawn, designed by Adrian L Norman, is laid out in a series of small pockets of landscapes, allowing for a series of semi-private clusters of activity. Groups of various sizes can find spaces for picnic, barbecues or solitary pursuits.

Conscious of the impact of the space on the city’s carbon footprint renewable energy sources were incorporated into the building of Skypark's rooftop facilities. Recycled rainwater is used for rooftop irrigation, solar power heats the clubhouse interior showers, and wind turbines are used to power portions of the lighting of the space. 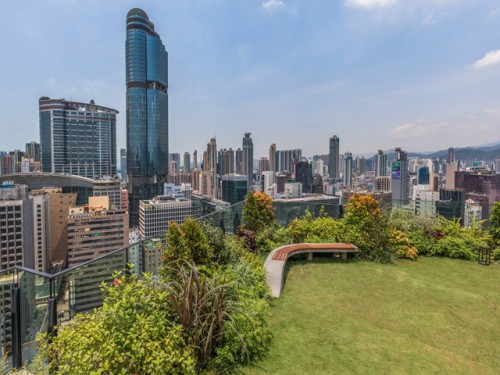 A statement from New World Development advises “the architect has created a space perfect for urban dwellers, especially for balance-centric millennials, realising their dream of longing for a serene space where they can escape the hustle in the midst of the bustling city life.

"The end result is a green clubhouse in the sky and a park high above the city, where people can interact with each other easier than ever, in a space without boundaries that provides inspiration for all."

"It breaks the traditional clubhouse design mould, and provides an open and revolutionary space.”

Images: The roof of Hong Kong's Skypark development (top), the swimming pool in the Aurora clubhouse (middle) and The Lawn garden area (below).