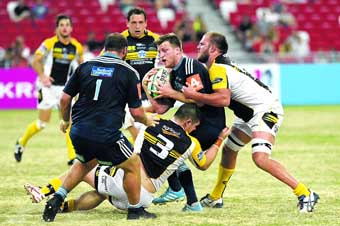 Having been long term rivals in trade and finance, Hong Kong and Singapore are currently vying to become Asia's top city in the arts and sport.

Having completed the Singapore Sports Hub early this year, the Lion City is looking to host an increasing number of international sporting events, on top of its hosting of its Formula One Grand Prix, the Women’s Tennis Association (WTA) Championships and the rugby World Club 10s having been the first event staged at the new National Stadium back in June.

With an international football teams and brands to be hosted at the Sports Hub is developing as a regional rugby base with plans to stage a British & Irish Lions tour match, international Tests and a leg of the rugby sevens series.

Sports administrators in Hong Kong have long feared that the city will lose out to Singapore, with Hong Kong's own long-mooted Kai Tak sport stadium still no further forward than the planning stage after repeated delays. Currently, work on the Stadium and surrounding infrastructure is not scheduled to commence until 2016 with completion scheduled for 2020.

While the Hong Kong Rugby Sevens remains a high profile international event, the small capacity and repeated pitch quality issues of the Hong Kong Stadium is holding back the attraction of other sporting events.

“The snail-paced development makes a mockery of our reputation as the capital for swift infrastructure development (and) not only has our image suffered, we have also lost out in terms of hosting international sports events as a result.

“(Singapore) is already benefiting from our inefficiency and delay (and its) new Hub has claimed at least one event from us - the rugby World Club 10s tournament.

“This came after the Hong Kong Rugby Football Union could not commit to holding the event because of uncertainties over the existing Hong Kong Stadium.

“A policy to make Hong Kong a centre for major sports events was formulated as early as 2002. Ironically, it will be nearly two decades before the right facilities are in place.

“Officials should speed up the project lest more events go elsewhere.”

By contrast, Hong Kong, which already has the third-largest art-auction market in the world, is moving forward as a cultural hub with the development of its US$3 billion West Kowloon Cultural District.

Accroding to Richard Florida, who studies global competitiveness and urban development at the University of Toronto, both cities understand that "building a super-competitive, super-productive society" needs a world-class arts and culture scene to  "attract the world's best and brightest" professionals from an array of industries.

Florida states "what makes New York and London so robust, even at times of economic crisis, is that anyone in the world wants to go there (to work) and that's what Hong Kong and Singapore are trying to be."