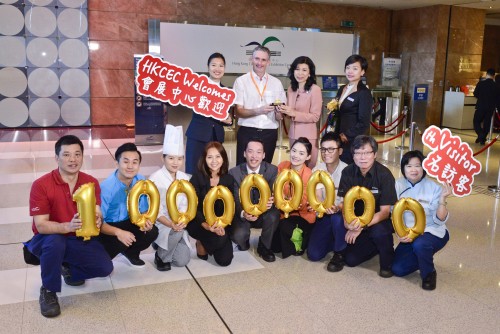 The Hong Kong Convention and Exhibition Centre has celebrated a major milestone, welcoming its 100,000,000th visitor since its opening in 1988.

The milestone was reached on Friday 14th October during the Hong Kong Electronics Fair (Autumn Edition) - the world’s largest electronics fair – when Nicholas McVeigh from the United Kingdom was surprised by a flashmob made up of a group of uniformed staff of Hong Kong Convention and Exhibition Centre (Management) Limited [HML], the operating and management company of the HKCEC.

He was then officially welcomed by HML’s Managing Director Monica Lee-Müller, who presented him another big surprise – a HKCEC model made of genuine gold to mark this special occasion.

Lee-Müller welcomed McVeigh, a trade buyer and has been visiting the Hong Kong Electronics Fair (Autumn Edition) at the HKCEC for over 10 years, and remarked “over the past 28 years, HML has built a strong and diversified event portfolio for Hong Kong and the HKCEC.

“Since the opening, the HKCEC has hosted over 45,000 events, from world-class exhibitions, international conferences, multi-national corporate meetings, to entertainment and sports events, and smaller meetings and banquets.

“At HML, we pride ourselves on delivering consistently high quality services to event attendees from around the world. More importantly, these events have contributed significant economic benefits to Hong Kong by generating spin-offs for related industries, creating numerous jobs and business opportunities, and enhancing Hong Kong’s international image and reputation.”

The HKCEC, hosted over 1,100 events and welcomed more than 5.5 million exhibitors, buyers, delegates and visitors from around the world in the fiscal year ending June 2016.

Being voted consistently ‘Asia’s Best Convention and Exhibition Centre’, the HKCEC is now home to four of the world’s largest and seven of the Asia’s largest trade exhibitions of their respective industries.