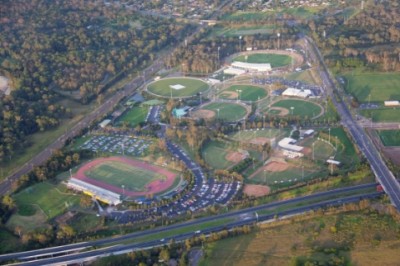 Filming of the movie 'Unbroken', directed by Hollywood star Angelina Jolie, has come to an end at the Blacktown International Sportspark in Western Sydney.

The project saw over 300 extras and 250 crew converge on the Sportspark's Athletics Centre which was transformed into the athletics track of the Berlin Olympic Stadium in the 1930s.

Jolie's crew secured exclusive access to the athletics track at the western Sydney venue from 25th November last year until 20th January, with computer graphics to be used to transform the venue into the historic venue for the finished movie.

The film, due for release in December 2014, tells the story of former US Olympic runner Louie Zamperini, a competitor at the 1936 Berlin Olympics and later a World War II prisoner of war.

Blacktown International Sportspark Sydney is no stranger to the cameras. It has been the back drop for television commercials, television series, and magazine shoots, most recently featured in the January 2014 issue of Australian Women's Health magazine.

Commenting on the venue's hosting of Jolie's movie, Mayor of Blacktown City Councillor Len Robinson stated "Blacktown International Sportspark hosts a variety of sports at different levels but it's great to see the venue has such a diverse range as a sporting facility and can be used for films and photo shoots.

"The Sportspark look forward to more opportunities like this in the future."

For more information on filming at Blacktown International Sportspark call 02 9839 6591.