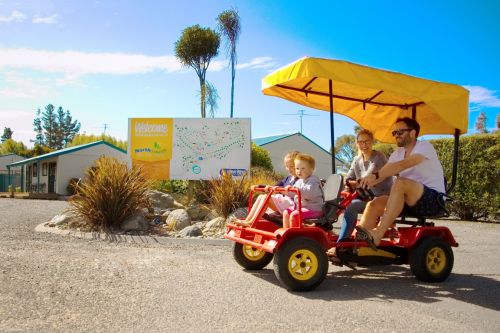 To assess this economic value, earlier this year HAPNZ engaged Angus & Associates to examine the expenditure of holiday park visitors across a range of regions and by a variety of visitor types.

This peak season study found that the total spending by holiday park visitors of $1.068 billion means their direct economic contribution is similar to that of the New Zealand recreational fishing sector ($946 million in 2016), and greater than the cruise sector ($484 million, 2016), and the New Zealand music industry ($245 million, 2015).

Compared with other export sectors, the foreign exchange contributed by international visitors staying in holiday parks ($490 million) is as substantial as that generated by New Zealand apple exports ($562 million) and the aquaculture industry ($500 million).

The research found that visitors spent an average of $145.71 per night while staying in holiday parks ($113.73 for domestic visitors and $190.46 for international visitors).

Commenting on this, HAPNZ Chief Executive Fergus Brown explained “this decrease was primarily driven by the domestic market.

“We believe it’s mainly because Kiwis are spending less on fuel, as the price of petrol has fallen since the previous period of research in 2014/15.

They also spent less on activities and attractions, probably because of our poor summer.”

Domestic visitors account for two-thirds (66%) of holiday park guest nights, while the international market has grown over time to now make up one-third (34%) of guest nights (up from 20% 15 years ago).

Average expenditure per person per trip has increased by 12% since 2014/15 - primarily driven, according to Brown, by an increase in expenditure by international visitors, which may reflect the falling cost of international airfares.

The table below shows how the expenditure of these visitors is distributed amongst various types of businesses within host communities. It also calculates what this might mean in terms of expenditure on an annual basis (based on guest nights for the year ending January 2017).

One-quarter (25%) of holiday park visitor spend can be attributed to accommodation costs (around $266 million annually). The remainder, $760 million, is mainly spent on activities/admission fees, groceries/snacks and eating out, and transport (including petrol/fuel).

Further explaining the findings, Brown states “Angus & Associates' research found some interesting differences in the expenditure of international and domestic holiday park visitors. International visitors spend significantly more on activities and attractions and transport, while domestic visitors spend slightly more on accommodation and goods such as snacks and groceries.

“International visitors also have a much shorter average length of stay at a holiday park - three nights, compared with seven nights for domestic visitors. So while international visitors spend more on a daily basis, domestic visitors spend more per stay. For this reason, both markets continue to be important to the sector as each offers different benefits.”

The research also found holiday park visitors spend on a very wide range of items, meaning the economic benefit of a holiday park for its host community is not only well spread, but also not limited to small ticket items. For example, the 2016/2017 research identified expenditure on clothing and footwear, books and magazines, jewellery, camping and fishing equipment, pet accommodation, gifts, car and bike repairs, pharmacy items, fabric, furniture, postage and souvenirs.

“Two-thirds (69%) of international visitors to holiday parks during the period of the research were staying in a campervan and these visitors reported higher than average spending on activities/admission fees and (not surprisingly) transport costs.”

As Brown concludes “other indirect expenditure should also be taken into account, such as the dairy that employs an extra person over summer to cope with the business generated by holiday parks; the boating store that places additional radio advertising to attract purchases from holiday park visitors; or the local council that employs contractors to re-seal the public road leading to the holiday park.

“Holiday parks provide a genuine authentic New Zealand holiday experience. The sector is heartened to see a change from parks being sold for redevelopment to new parks being established, with developments in Glenorchy and Hokitika being recent examples.”

For more information, go to www.holidayparks.co.nz