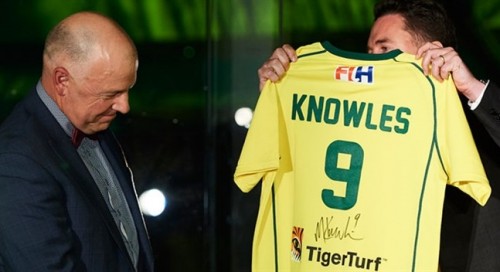 Hockey Australia has announced a three-year partnership extension with synthetic surfaces manufacturer Tiger Turf which will see the relationship continue until 2020.

As a part of the partnership, Tiger Turf will work with Hockey Australia’s Hookin2Hockey (Hin2H) program utilising the network of schools that are looking to lay multi surface pitches. Schools will be eligible for a Hookin2Hockey clinic that will be provided by Hockey Australia and will include the Hin2H schools pack as a legacy item.

Tiger Turf will also have a presence at international matches hosted by Hockey Australia with the inclusion of mini pitches for junior participation.

In addition to the contract extension, Tiger Turf will take up the back-partnership space on the Hockeyroos and Kookaburras uniforms for the upcoming trans-Tasman Trophy in New Zealand and the International Festival of Hockey.

Welcoming the sponsorship extension, Hockey Australia Chief Executive Cam Vale stated “we are delighted to have extended our partnership with TigerTurf.

“They are a fantastic supporter of Hockey Australia and will be an important element of the work we are undergoing to further develop our Hookin2Hockey program, as well as in their continued support of our national teams.”

One of the world’s largest artificial turf manufacturers, Tiger Turf has been in production for over 35 years.

“As a further extension of the new agreement we are particularly excited to having the Tiger Turf name emblazoned across the backs of the Hockeyroos and Kookaburras shirts for the upcoming Festival of Hockey.”

Kerr concluded “it’s important that we are seen to be putting something back into the sport.

“We see our partnership as a great way to not only support our national teams but the sport of hockey in general.

“We look forward to the next three years and beyond in working with Hockey Australia to grow the sport.”