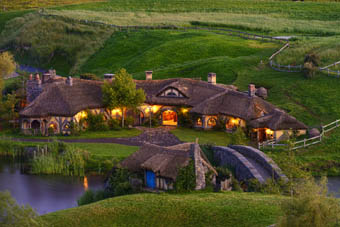 The Hobbiton Movie Set, near Matamata in New Zealand’s Waikato region, has welcomed its one millionth visitor.

The popular attraction is now one of New Zealand’s most visited locations, drawing international visitors, fans of the J.R.R. Tolkein’s imaginary Middle Earth and the convention and incentive sector.

Since filming wrapped on The Hobbit trilogy, New Zealand has seen an unprecedented increase in the flow of fans and tourists to the country, with more visitors than ever before citing the popular films as an influencing factor when choosing to travel to New Zealand.

The one millionth visitor was presented with an exact replica of ‘The One Ring’ featured in The Hobbit and Lord of the Rings movies along with a bottle of the Green Dragon’s ale.

Hobbiton Movie Set General Manager Russell Alexander explained “it is a very exciting and humbling achievement to have hosted one million guests over the past 13 years.

“It’s an incredible milestone. We are extremely proud of our enduring role in the real Middle-earth and we look forward to hosting many more visitors in the years to come.”

Tourism New Zealand Chief Executive, Kevin Bowler, says that The Lord of the Rings and The Hobbit trilogies have given New Zealand a unique opportunity to showcase itself by leveraging off one of the largest movie franchises in history.

“And while the trilogies are complete, New Zealand’s association as the home of the cinematic Middle-earth will live on. The establishment of Middle-earth tourism experiences – the most famous being Hobbiton Movie Set - ensures the legacy continues.”

Since the completion of the final part of The Hobbit trilogy, actors from the movie series and fans have called for a new Middle Earth museum to be built in New Zealand.