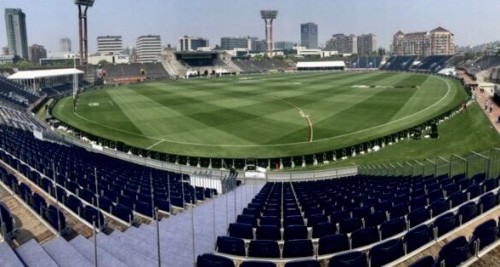 HG Sports Turf played a big part in the international match becoming a reality, being first engaged by the AFL in the early part of 2016 when AFL were reviewing suitable venues in Shanghai.

Once the venue was locked in, HG Sports Turf were chosen by the AFL to undertake the improvement and management of the turf surface from November 2016 to May this year.

HG Sports Turf General Manager Erik Kinlonexplains “we managed with a local crew on the ground full time following a strict, HG Sports Turf program for improvements and maintenance of the AFL surface.

“HG Sports Turf managers led by Nathan Humphreys attended the site on a regular basis to monitor the progress of the works and assess the field (and we then) sent an experienced crew to the venue for two weeks to execute the preparations for the game.” 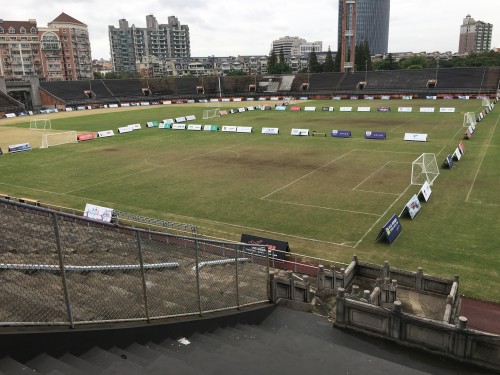 When first encountering the venue, HG Sports Turf found a surface with inconsistent grass cover and and ground levels.

With the previous onsite maintenance consisting of two men and two 20-inch rotary mowers with catchers, mowing whatever grass was left at approximately 40mm, HG Sports Turf employed a local consultant in China to help manage/communicate with the locals, as, Kinlon explains “the language barrier (was) a challenge.”

HG Sports Turf then undertook all programming of works and took responsibility for the oversight of all works on the ground to ensure they were executed to the standard required.

Kinlon adds “all turf maintenance consumables and machinery were procured locally in China, with some degree of difficulty - machinery availability and quality proved a challenge.

“We imported a line-marker to undertake the field markings, as the locals would normally use a regular paint roller on a long handle, similar to painting your house.

“All paints for logos and lines were sourced from Australia, in order of maintaining consistency in colours for logos with existing AFL venues.”

With a set of Abel Sports goal posts already at the venue, post sockets had to be re-set as the old sockets had been demolished. 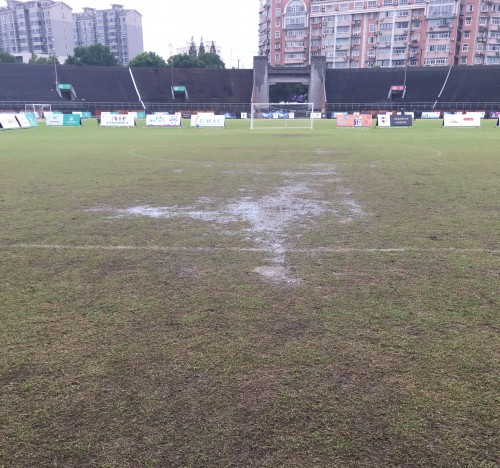 Kinlon continued “because of the conditions of the AFL field at the stadium, the AFL engaged us to supply a nursery of our ‘Ready to Play’ Eclipse turf as some insurance against the damage from unregulated use, this would give us the flexibility to install turf if irreparable damage was to occur close to the event.

“AFL had exclusivity to the area, which seemed to go unnoticed at times with the locals, and the field was used at night times, which we didn’t find out until turning up the following day.

“Field usage regulations were a big challenge, as was limited water supply and insufficient pressure. The holding tank for the irrigation system took about 45 minutes to refill, but would empty after 10-12 minutes application per station.

“So it would take 8 hours to apply less than 1mm to the field.

“The irrigation infrastructure at the venue was all manual, so ... all watering was undertaken in daylight hours, with the exception of game week, where we had staff at the venue through the night to ensure we could get sufficient water into the turf. 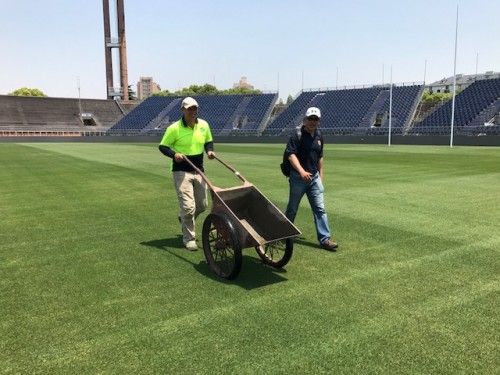 “Local authorities also requested just 24 hours prior that the venue be shut down on game day for three hours ... game day preparation was out the window and we ended up working through the night before to make sure it was all in order for play.”

Kinlon reflects appropriate resources were difficult to manage in China, advising “even the most basic tools we take for granted over here are simply not used there , so there was a lot of adapting to local tools as well as improvisation.

“Some of the lengths we went to included hand watering out of a wheelbarrow, making our own tools out of construction materials on site, even cutting turf with a bread knife and a meat cleaver.

“Quality was very difficult to manage in China (and) I just don’t think there is enough exposure to high performance sports surfaces in the region, so our view of what is acceptable and the locals’ view was light years apart.

“However, after executing this project and having the exposure at this level, I think it is a step in the right direction for the locals to understand what is required to produce a high quality turf surface.” 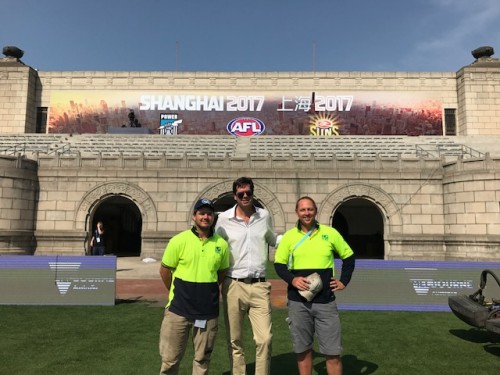 As for how the ground received on match day by the AFL, the teams and the players, Kinlon concludes “AFL officials were extremely happy with the results that were produced and the players even more so.

“Some players and officials even took the time to come and thank us individually.  In our trade we generally only hear the criticisms from players or the media, so it was a great result to have the feedback that we did.”