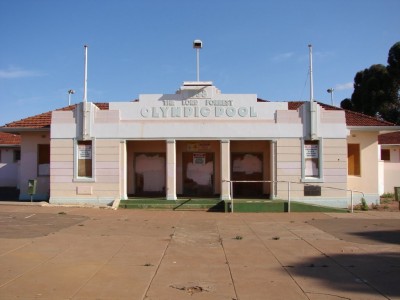 The planned redevelopment of the historic Lord Forrest Olympic Pool in Kalgoorlie is taking into account the building’s Category 1 heritage status, which requires redevelopment approval from the Heritage Council of WA.

Closed in 1999, when it was replaced by the Goldfields Oasis Recreation Centre, in 2012 the City of Kalgoorlie-Boulder decided to convert the outdoor swimming pool into an amphitheatre and youth centre that would link with an adjoining skate park.

Over the past 18 months, a heritage architect has been engaged to draw up designs for redeveloping the site into a youth facility, with the understanding that the final plan must retain the facility’s art-deco entryway and incorporate interpretive elements.

Demolition or retention of Lord Forrest’s other structures - including the pool basins, change rooms, grandstands and pump house - are subject to final design approval.

However, many locals want the historic pool restored and reopened with a petition ‘Re-build & Re-store our Historic Lord Forrest Olympic Pool’ aiming to attract 30,000 signatures.

The Olympic-sized The Lord Forrest swimming pool was opened in 1938, and is widely acknowledged as the second such swimming pool of its type in Australia (after the North Sydney Olympic Pool).

In addition to the local campaign for its restoration, the pool also inspired a recent ABC feature Will Kalgoorlie ever have an outdoor pool again?. 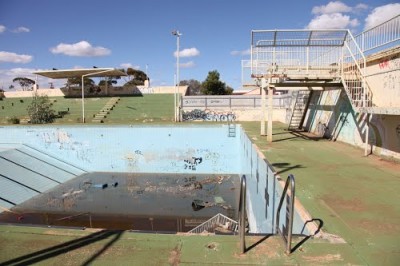 In response to calls for Kalgoorlie to again have an outdoor pool, Kalgoorlie-Boulder Mayor Ron Yuryevich told ABC Goldfields "I think originally the master plan for the Oasis was for an outdoor pool as well sometime in the future.

"We've got the land there (but) it comes down to how much people would use a pool there.

"I'm not sure how many people would be happy to spend a considerable amount of money on an outdoor pool that would be used only in summer and that would run at a huge loss.

"Council would look at anything in regards to providing facilities for our community, that's what we're about but at the end of the day we've got to consider the big picture, and that includes funding and operational costs."

Images: The heritage-listed facade of the Lord Forrest Olympic Pool (top) and the pools as they are today (below).

Click here to read the ABC feature Will Kalgoorlie ever have an outdoor pool again?