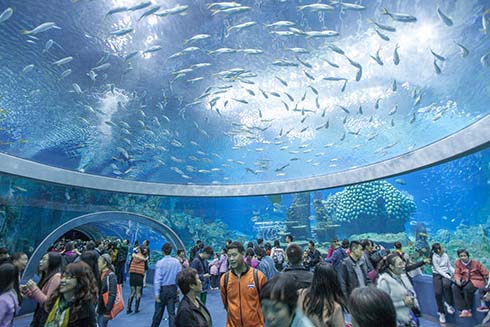 The Chimelong International Ocean Resort on China's Hengqin Island drew in about 500,000 visitors during its first 10 days in business over the period including the Chinese New Year

Explaining that opening the integrated resort over the Lunar New Year holidays had boosted visitor numbers, Guangdong Chimelong Group Co Ltd spokesperson Yang Hua told Chinese media "we had about 70,000 to 80,000 visitors each day during the Chinese New Year Holidays.

"The majority of these visitors were independent travellers from Zhuhai or from the Pearl River Delta region."

Yang added that 500,000 people had visited the resort between its opening on 28th January and the seventh day of the Lunar New Year 'golden week' on 6th February.

Located next to the Chinese 'Special Administrative Region' of Macua, with which it is to be connected by bridge, Hengqin Island is being developed as the 'Orlando of China' with 10 theme parks/integrated resorts to be built on the Island along with 12 luxury hotels, three golf courses, two international yacht clubs, several shopping malls and a convention centre.

The Chimelong Group already operate the Chimelong Paradise theme park and waterpark, China's most visited attractions, in the nearby city of Guangzhou, that also includes a safari park, crocodile farm and hotels.

For details go to http://www.hengqin.gov.cn/en/index.php/page/ltxm/lid/2