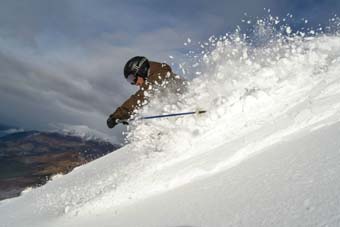 While days of snowfalls caused difficulties for people across South Island, the winter weather has enabled many of New Zealand's skifields to begin their 2013 operations.

Early season snowfalls saw Queenstown's Coronet Peak open on 8th June, making it the first Australasian field to open for the winter, with other skifields opening in the past fortnight.

Canterbury's Mt Hutt opened on 15th June while The Remarkables opened today (22nd June). In the Mackenzie country Lake Ohau, Fox Peak, Mount Dobson, and Round Hill skifields have all been blanketed with fresh snow in recent days, and are set to be open for the upcoming school holidays.

Operational since 8th June, Coronet Peak has been enjoying one of its best periods in recent memory, with 2,000 people on the slopes on opening day

Coronet Peak's investment and recent software update in a fully-automated high-tech snowmaking system, the largest in the Southern Hemisphere, paid dividends in adding to natural snowfalls to get the ideal base of snow for opening day.

Coronet Peak Ski Area Manager Ross Copland explained "not only are we first to open, but thanks to the fantastic job by our grooming team we're doing it with a number of trails operating for all levels of skier and boarder, a full range of facilities, great coffee, braziers blazing on the deck and a fantastic vibe."

Around 1,300 keen skiers and snowboarders helped Canterbury's Mt Hutt celebrate its opening on 15th June while Queenstown's The Remarkables ski area kicked off with well over a metre of snow on its slopes and all chairlifts open and operating.

The Remarkables Ski Area Manager Ross Lawrence said local snow lovers and visitors in town for the American Express Queenstown Winter Festival had been "champing at the bit" to get up to the slopes as the buzz grew about conditions.

"To be frank it's not often that we have such amazing snow and the coverage we've got from Day One.

"The timing couldn't have been better and even though it's pretty cold up here people have dressed for the conditions. It's snowing which is what winter is all about."