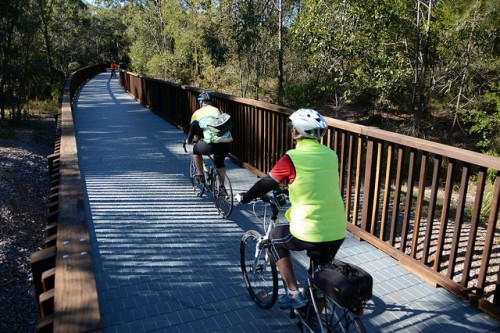 The Heart Foundation has welcomed the release of the Federal Government’s `Smart Cities Plan’ and called for innovative funding that will support active travel infrastructure. This includes infrastructure that makes walking, cycling and taking public transport the easier options.

Heart Foundation research has found that for healthy environments and better transport connections, as identified in the Plan, they make it easier to walk to shops, enjoy time in a park, catch public transport and go for a bike ride.

This makes a big difference in getting the physical activity people need each day – Smart Cities are also Active and Healthy Cities.

Heart Foundation Spokesperson on Physical Activity Professor Trevor Shilton said the identification in the policy of providing the opportunity to choose active transport and investment in better accessibility were positive progress from the Federal Government.

Professor Shilton explained “despite strong evidence of the benefits of physical activity, far too many Australians led sedentary lives.

“In Australia, physical inactivity costs the health budget an estimated $1.5 billion per annum and causes and estimated 14,000 deaths a year.

“Physical inactivity contributes to almost one-quarter of the cardiovascular burden of disease in Australia and is a critical factor in our obesity epidemic, with more than half of all Australian adults being overweight or obese.

“If physical activity is thought of as a medication with an adult dose of 30 to 60 minutes a day, there is scarcely anything that could be taken daily that would provide comparable health benefits.”

By enabling participation in regular walking and cycling through smart urban design Australians can get most of the physical activity they need for good health, increase their life expectancy by reducing the risk of heart disease and other non-communicable diseases.

Professor Shilton added “a recent landmark study by Prof James Sallis and others published in The Lancet in April found that the design of urban environments had the potential to contribute substantially to physical activity.

“This study was conducted across 14 cities in 10 countries on five continents. Good design and people-friendly spaces and places all add to how liveable a community is everywhere in the world, and was shown to contribute between 45 and 90 minutes per week of additional walking.

Launched last week by Australian Prime Minister Malcolm Turnbull, the Smart Cities Plan represents a new framework for cities policy at the Federal level that aims to guide action across various portfolios, to deliver better outcomes for our cities, the people who live in them.

It will begin with a $50 million allocation for planning and the brokering of deals between the Federal Government and private funders to develop infrastructure.

For more information go to www.cities.dpmc.gov.au