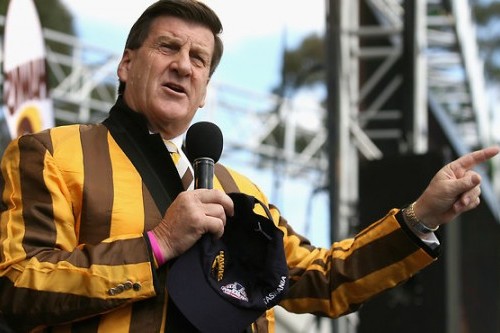 Jeff Kennett, the President of Hawthorn FC, has slammed the AFL’s moves to take the game to overseas markets, saying it is a “waste of time and money”.

With the AFL looking to grow the game in international markets, a Premiership match in the Chinese city of Shanghai last season, an initiative that will be repeated this year with the round nine between Gold Coast and Port Adelaide.

With clubs reported to be exploring India as a potential marketplace for growth and the rectangular stadium format of AFLX being seen as attractive for international markets, Kennett is unconvinced.

Speaking this morning on Melbourne’s SEN radio station, the former Victorian Premier stated “why do we have a general manager for China and India (and) why are we trying to push the game into those areas?

“For goodness sake, surely we should be concentrating on making the game here self-supporting.

“I said to my players the other day, don’t expect me to ever approve you travelling overseas to play a game for points.

“We are a professional team. I’m not going to put at risk four points to have you flying in a plane from here to China or here to India, for a four-point game.

“That’s not what we are paid to do.

“I don’t even like them going overseas for exhibition games, I’ve said no to that as well.

“Don’t go and put yourselves at risk. This is a serious business.

“I don’t like the idea of when we are paid to try and win a premiership, you therefore put your players in planes to travel miles into a foreign environment to play a game of football.

“How can you properly prepare a team for a match when they spent 24 hours in a plane?

“We are serious about what we do, we have obligations to our members, and that is to do whatever we can to win a premiership.

“Our job is to play the game seriously in the environment in which it lives.

“It is an absolute waste of time and money.”

Kennett went on to question he AFL’s motives on wanting to implement a mid-season trade and draft period, adding “why are we now talking about changing the rules mid-season and having another draft?

“I saw Gill (AFL Chief Executive Gillon McLachlan) say he doesn’t like the predictability of the game through a year, but how could last year be described as predictable with Richmond?

“Or the year before with the Bulldogs. That’s not predictable.

“What’s wrong with the game that we have to keep changing the rules all the time?”