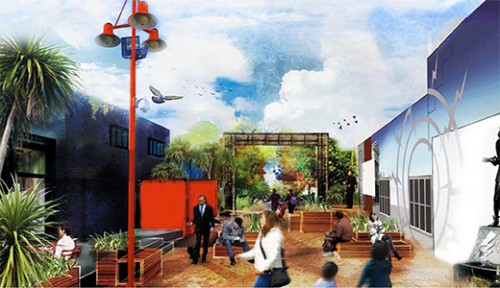 A new Rocky Horror-themed Pavilion and a chandelier recreating a feature of the former Embassy Theatre's foyer will be installed in Hamilton’s Riff Raff Square as the second stage of the Embassy Park redevelopment project.

The ongoing redevelopment of Embassy Park is part of three important projects for the Council – the Central City Transformation Plan and its subsequent Laneways Plan, and the River Plan. Via the popular river paths, Embassy Park also connects to another central city project, the development of the Victoria on the River site.

The Pavilion will replace the existing toilet block with Rocky Horror-themed toilets in a bright red converted shipping container, and a ‘Green Room’ for street performers and musicians.

Project Manager Mark Servian, who commissioned the Riff Raff Statue in 2004, explained “we're really excited to be finally getting these critical elements of the Embassy Park redevelopment installed.

"Public toilets, especially ones that have been given a creative treatment, are much more complicated to organise than public art!"

"We are expecting Frank N. Furter's Gadget Box and the Embassy Foyer Chandelier to make Riff Raff Square into an even more interesting and amusing place to visit and hang out. The Riff Raff Statue is Hamilton's most internationally popular public art work, and we intend to make Embassy Park the greatest little park in New Zealand.” 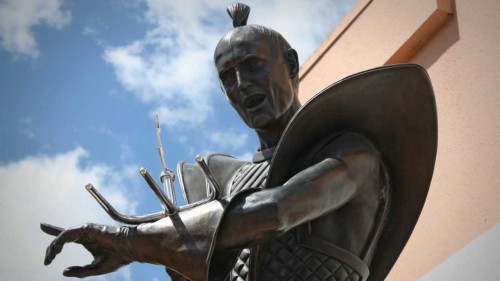 The next project is a performance stage for the back of Riff Raff Square and the creation of a new destination ceremonial space at the bottom of the park, with future goals including a Proscenium Arch to further celebrate the Embassy Theatre.

This stage of the park redevelopment includes a very colourful new Rocky Horror-themed planting plan, designed by Wintec landscaping students as a class assignment and put into place once the Pavilion and chandelier are in situ.

Hamilton Mayor Julie Hardaker welcomed the next phase of the development of the park, which is located in the central city's busy hospitality and entertainment precinct, adding “the redevelopment of Embassy Park and home of Riff Raff is an exciting project for Hamilton and is included in the Central City Transformation Plan as part of the transformation of laneways in the central city.

"The Embassy Park Working Group has done a fantastic job of gathering community and financial support and getting this project done. This next stage will be a major part of the transformation of this space into a true reflection of the Rocky Horror Show and a great tribute to our own Richard O’Brien.”

The Embassy Park Working Group is made up of local business owners and artists who came together in 2013 after Australian public places expert and social thinker David Engwicht called for a community effort to develop the park following public concern over anti-social behaviour in the area.