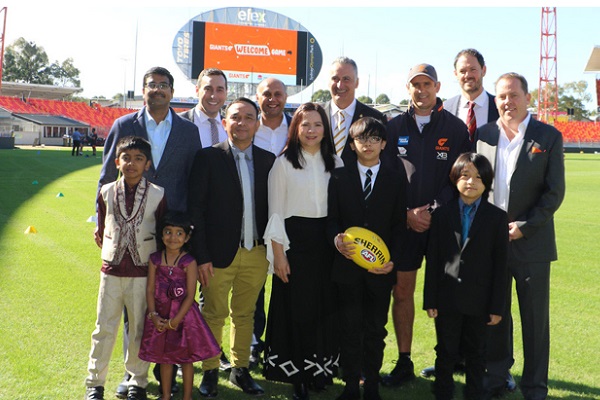 The GWS GIANTS, in partnership with AFL NSW/ACT and the NSW Government, will be presenting the inaugural Welcome Game when the GIANTS host Carlton at GIANTS Stadium tomorrow.

The centrepiece of the Game will be a citizenship ceremony for 300 western Sydney residents that is part of the GIANTS celebrating their relationship with the diverse communities of Western Sydney to welcome new citizens to AFL.

The event will see the new Australian citizens form a guard of honour as the GIANTS run out before doing a lap of honour of GIANTS Stadium at half-time.

“It has to be built into everything you’re doing.”

For the Giants, the greater western Sydney region is home to nearly two million people who come from more than 170 different countries and speak more than 100 different languages.

“For us to be able to learn from other cultures and communities, that’s the benefit that we get. We get to become far more culturally rich by engaging in different communities and bringing new people into the game who have different cultural ideals and different values. That only enhances you as an organisation, as a football club.”

It’s something the GIANTS have firsthand experience with. Earlier this year, Haneen Zreika debuted for the GIANTS’ AFLW team, becoming the first Muslim woman to play the game at the elite level.

NSW Minister for Multiculturalism and Sport, John Sidoti, said the Welcome Game will showcase the rich cultural diversity of Western Sydney, commenting “sport is one of the best ways to build social cohesion and create a sense of belonging for those new to the community.

“It’s fitting that hundreds of people from Western Sydney will experience their first moments as Australian citizens at an iconic Australian sport, at their local Stadium.”

GIANTS Chief Executive David Matthews added “Western Sydney is one of the most culturally diverse regions in the country and we’re delighted to be celebrating this on Sunday.

“The Welcome Game acknowledges the contribution diverse communities have made to our game for generations and introduces hundreds of new Australians to our great game.