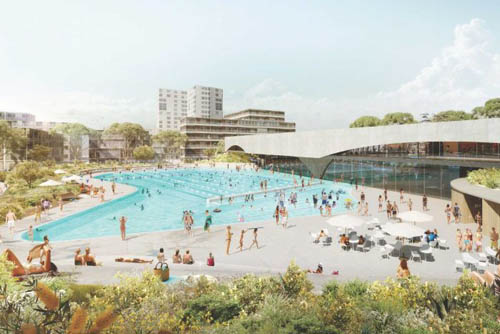 The City of Sydney's recently released 2019/20 capital works program has revealed that the cost of its new Gunyama Park Aquatic and Recreation Centre has risen to more that $84 million - from a 2015 estimate of $50 million.

With a significant portion of the City’s 10-year $1.6-billion capital works budget to be spent in the next financial year on a series of infrastructure projects to benefit the community, almost $200 million has been earmarked for the 2019/20 program in the city with $103.9 million to be used for major projects, $36 million for extensive asset enhancements and $56.5 million for rolling capital renewal programs.

A statement from the City of Sydney advises “the funds will cover major infrastructure projects in the fast-growing Green Square neighbourhood, and improvement of parks and open spaces as well as environmental performance in City properties and facilities.”

The expenditure includes the large-scale urban renewal of Green Square, including construction of the Gunyama Park Aquatic and Recreation Centre, the central park The Drying Green, and major works on the area’s streets – which have been allocated $84.6 million, with the facility, which is due to open next year, allocated the largest share.

Other significant expenditure include green infrastructure projects, including an energy efficiency program for the City’s major properties, improving energy services at Cook + Philip Aquatic Centre, a water harvesting treatment plant at Sydney Park, and the installation of solar panels on City-owned properties ($9.1 million); and development of open spaces and parks, including a $5m boost for a new skate park at Sydney Park ($12.6 million).

The City will also spend $3.9 million for the Johnstons Creek masterplan, which aims to protect and enhance a harbour foreshore area at Glebe, Annandale and Forest Lodge; and $2.3 million for the latest instalment of the City’s contribution to the NSW Government’s light rail project.

Additionally, $9.6 million has been allocated for bicycle related works in the next financial year, with construction underway on Wilson and Burren Streets and Epsom Road in Green Square and planned construction on a new separated cycleway on Lawson Street in Redfern. These cycling projects are partly funded by the NSW Government.

Given Sydney’s growing residential, business and tourist population with over 1.2 million people using the City's services every day, Sydney Lord Mayor Clover Moore said that it was imperative to provide the local community with the infrastructure and facilities they needed to ensure inner Sydney remained an exciting, economically-strong and sustainable place to live, work and visit.

She explained “transforming Sydney’s oldest industrial heartland into a new Green Square town centre is an enormous task, but I’m so proud of the wonderful new library and community and cultural precinct we’ve established, and I look forward to the future aquatic and recreation centre.”

The 2019/20 budget is currently on public exhibition until 11th June 2019, after which it will be considered by Council for final adoption.

Image shows an artist's impression of the Gunyama Park Aquatic and Recreation Centre.