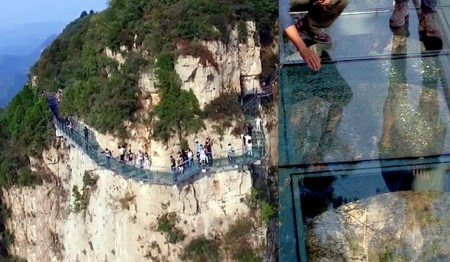 Guests traversing a new transparent walkway around Yuntai Mountain in China’s in Henan Province had the shock of their lifes when a glass pane shattered beneath their feet.

One tourist posted images on Chinese social media, claiming that she could feel the walkway shake under her feet when the glass broke.

The glass-bottomed walkway, which opened last month, is suspended over 1,000 metres above the ground, stretches in a U-shape for 68-metres around the scenic cliff face.

Since its official opening, tourists have flocked to the attraction..

A spokesperson for the Yuntai Mountain tourism bureau told the China People's Daily Online that the cracks occurred after a tourist dropped a stainless steel mug on the walkway. The spokesperson added that only one of a total of three layers of glass broke.

Glass walkways are increasingly popular in China will a 900 metre glass suspension bridge in Yunnan province opening in recent weeks.