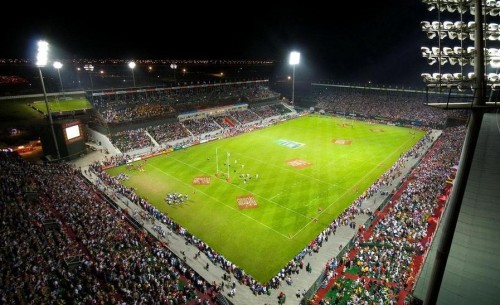 John Rhodes, Director of HOK’s Sports + Recreation + Entertainment practice, says that if that does happen, serious consideration should be given as to how best to physically stage Sevens’ events.

Rhodes said that traditionally rugby – for entirely justifiable, sensible reasons – has largely parachuted its teams on to football pitches or built dedicated stadia that are not obviously discernable from football grounds.

He explains “Twickenham and Murrayfield are indisputably iconic and exciting in their own ways but do they honestly stand out as venues designed specifically for the needs of rugby fans?

“If your answer is ‘yes’ then I can only assume that you have never bought a pint at the public bars of either.

“Now that Sevens is looking like rugby’s latest success, why don’t we start to think about the real-life way it is enjoyed – quite literally – at ground level? The culture of rugby, the game and, therefore, the atmosphere is very different from almost any other sport so shouldn’t the perfect venue reflect that?”

Rhodes sees that that there are numerous facets which are unique to rugby generally and Sevens specifically, and venues could reflect this by:

The Crowd: The rugby crowd culture sees people get to their seats minutes before kick-off, at half-time they go to the bar or bathroom or check their mobile phone, and after the final whistle they leave their seat as soon as possible … or even earlier, making them largely immune to any on-pitch activity that isn’t directly related to the match.

The trend across rugby, especially in Sevens, is that the crowd is even more dynamic; people go to the bar during matches, go to meet friends in different parts of the ground and generally have a good wander around. Consequently, as a minimum, venues need to make getting drinks and toilet access much easier and faster. The bathroom issue is especially true for women, as rugby crowds enjoy a very respectable division across genders.

Team Volumes: In Sevens, there are several teams, not just two, so Rhodes suggests creating and connecting different territories and create fan bases around them. Not only does this improve the crowd spirit, it creates strong potential revenues as these are highly sponsor-able assets.

Raising the Roof: Often roofs in venues are underused assets; the technology is there to utilise the roof as a means of amplifying sound. While ‘sound sponsorship’ may be a commercial bridge too far, at the very least this gives teams the chance to intensify their territory if they’re doing well.

Rhodes suggests creating a system whereby tickets can be swapped, booked or changed every half an hour so people can move seats which could facilitate fans wanting to support a given team or go to sit with their friends in a different part of the stadium.

The growing popularity of the sport on the back of its Olympics success could lead to purpose-built venues, such as the HOK concept design pictured here. 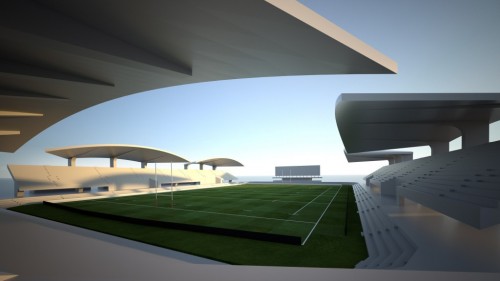 HOK is an Event Sponsor at the Stadia & Arena Asia Pacific 2016 event, taking place at the Yokohama Arena from 26th to 28th September.