The growing adoption of memberships and instalment payment plans by the Gold Coast’s theme parks is not only increasing repeat visitation and reducing price barriers but is also opening up new revenue streams.

In an analysis of Ardent Leisure and Village Roadshow’s performance by Citi Research, analyst Sam Teeger highlights the growing importance of memberships (an expansion of former season pass schemes) to the Gold Coast’s theme parks.

Suggesting that “membership ticketing (is) the new way forward”, Teeger details the introduction by Village Roadshow Theme Parks (VRTP) of a 12 month unlimited visit theme park membership at the start of the current financial year which after a year then automatically renew month-to-month after this time.

Teeger explains “there are three tiers of membership, (with) the base one starting at $9 per month and includes unlimited entry to Movie World, Sea World and Wet’n’Wild Gold Coast.

“This equates to $108 per year, which is less than the $129 that Ardent is changing for their 12-month unlimited pass.”

Writing that Ardent Leisure – which operates Dreamworld and WhiteWater World - has not responded with a similar offer, Teeger adds “one factor Ardent may wish to consider, if it decides to adopt the memberships, is the implications on revenue recognition, as the company typically would recognise the revenue from an unlimited pass when the customer first uses the pass.

“Whereas, in the case of a monthly membership, we suspect it could be difficult to recognise the entire amount upfront.” 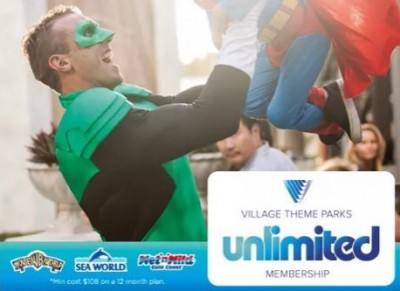 Teeger uses the example of the US-based Six Flags group, which operates 18 parks in the United States,

“Based on our research into Six Flags, we view the membership as an extension of the season pass strategy given the similarities between them.

“However, there are also a number of benefits arising from memberships over season passes.”

Teeger explains key points on the benefits of memberships:

1. Establish an attendance base in advance of the season, which reduces exposure to unfavorable weather

2. Holders are more profitable compared to single day ticket holders as the total ticket price is higher and they contribute to in-park spending over multiple visits

3. Potential to have a higher annual price relative to season passes (drive yields)

Commenting on performance, Teeger states “Six Flag’s season pass and membership attendance as a proportion of total attendance has increased in every year since 2010.

“This has contributed to the company achieving single digit revenue growth in each of these years.”

Looking to the future, Teeger adds “at this stage, Ardent has not responded with a similar offer, but given Village is the leader with over 60% market share, we would not be surprised if Ardent was to follow in the future if Village’s membership program is successful.”